Using FS I've always liked combining real world airline history with virtual aviation and trying to factor-in a sense of purpose to each of my own virtual flights.

The JBK COMET promoted and opportunity for me to do this by flying the historic BOAC route from London/UK to Johannesburg/South Africa .... following the airlines imperial route of the early 1950's as was briefly flown by its COMET 1 fleet prior to early 1954 .... and doing so in real time too

The routing I selected commenced by flying London/Heathrow to Frankfurt/Main, then fFrankfurt to Rome/Ciampino (Rome's original airport), Rome to Athens/Ellinikon (Athens original airport ), Athens to Cairo/Farouk, Cairo to Khartoum, Khartoum to Entebbe, Entebbe to Nairobi, Nairobi to Livingstone, and finally Livingstone to Johannesburg. A total of 9 sectors, flown at the rate of "1 sector per day" over as many days, and covering part of western Europe, the Mediterranean, the horn of Africa and eastern side of the African continent (once a region under British political/economic influence) .... all the way down to Johannesburg .... whilst also taking in some of the historic/cultural and geographic wonders of the world along this route too and which "ARE" represented in FS by default or available as add-on scenery enhancements. Fuel requirements were planned/calculated "manually" in accordance with my pre-recorded/observed FS fuel burn rates for the JBK COMET 1 simulation (myself and an HJG colleague have recently performed a wee bit of FDE surgery for this simulation and which we believe has improved it a little, but, which, at this time, we don't have authorization to distribute), for each flight sector, and which resulted in fuel loading well below COMET 1's maximum fuel capacity whilst otherwise simulating full payloads.

For this exercise I also used Tom GIBSON's classic 1950's/1960's era airport scenery (some very nice works of art by Wolfgang GERSCH, Mike STEVENS, and associates which are available from this/Tom's website .... and which I can highly recommend) just to add a bit of "period ambiance" for each stopover.

To try'n further enhance this feeling of "period ambiance" I additionally decided to create bit of B&W imagery at each of the 9 stopovers .... of a type that's not intended to resemble good FS imagery, but rather, is of the kind any "non-aviation minded tourist" embarking on such a long holiday adventure might casually photograph as a personal memento of places visited, and scenes observed, "whilst killing time at airports" prior to the departure of each flight .... and which are then additionally supported by the usual obligatory colour imagery showing-off the COMET 1 "in action" along each sector of the route flown.

So here we go with this review of my BOAC London/Johannesburg circa 1952/1953 routing .... via Frankfurt, Rome, Athens, Cairo, Khartoum, Entebbe, Nairobi, and Livingstone .... and flying the classic/pioneering DH 106 COMET 1 jetliner .... This route followed a roughly east-south-easterly track from the London/Midhurst VOR then across both the English Channel, and Belgum, and on into Germany. This route followed a south-south-easterly VOR to VOR track from Frankfurt, trending across western Germany, and both Austrian and Swiss borders, then on into northern Italy. This route followed a south-south-easterly VOR to VOR track from Rome, down the west coast of the boot of Italy, then trending east-south-easterly out over Ioanian Sea and toward the Gulf Of Corinth, and on into Athens. This route followed a southerly VOR to VOR track from Athens down to Crete, then trending south-south-easterly across the Mediterranean Sea and towards Egypt, to pick up the VOR for Cairo International Airport some 180 miles DME prior to arrival. Cairo is where my JEPPESEN E/R charts terminate, forcing me to then have to resort to a flat world/atlas map of the African continent, and use a protractor, ruler, and a pair of dividers in order to determine my route south for the remainder of this trip toward Johannesburg, and to also use "dead reckoning" (distance covered on the basis of airspeed, direction, elapsed time, and estimated drift) after having first previously GOOGLE searched all the necessary/primary VOR and NDB frequencies along each sector so as to aid relatively accurate navigation further south.

FS has a built-in GPS .... I know .... but .... using it (to me) is insultingly easy and simply "not challenging enough" (for me), essentially robbing one of the fun (I feel) as well as a sense of accomplishment upon the completion of an exercise such as this, not to mention also the very real prospect of becoming lost en-route in the event of inadvertent miscalculations during ones navigation planning, but, which fortunately did not come to pass in my particular case as the remainder of this report will demonstrate

The route from Cairo to Khartoum utilized a VOR track almost due South for the first less than 200 miles after departure .... basically following the Nile Valley into Sudan .... to lock onto the VOR within 180 DME prior to arrival at Khartoum International Airport.

Following departure from Cairo a quick detour was made in order to view the ancient pyramids of Egypt on the Gizeh Plateau at Necrapolis. The oldest of these 3 pyramids is believed to have been constructed during the 27th century BC. Each is assumed to have taken some 200 years to construct. 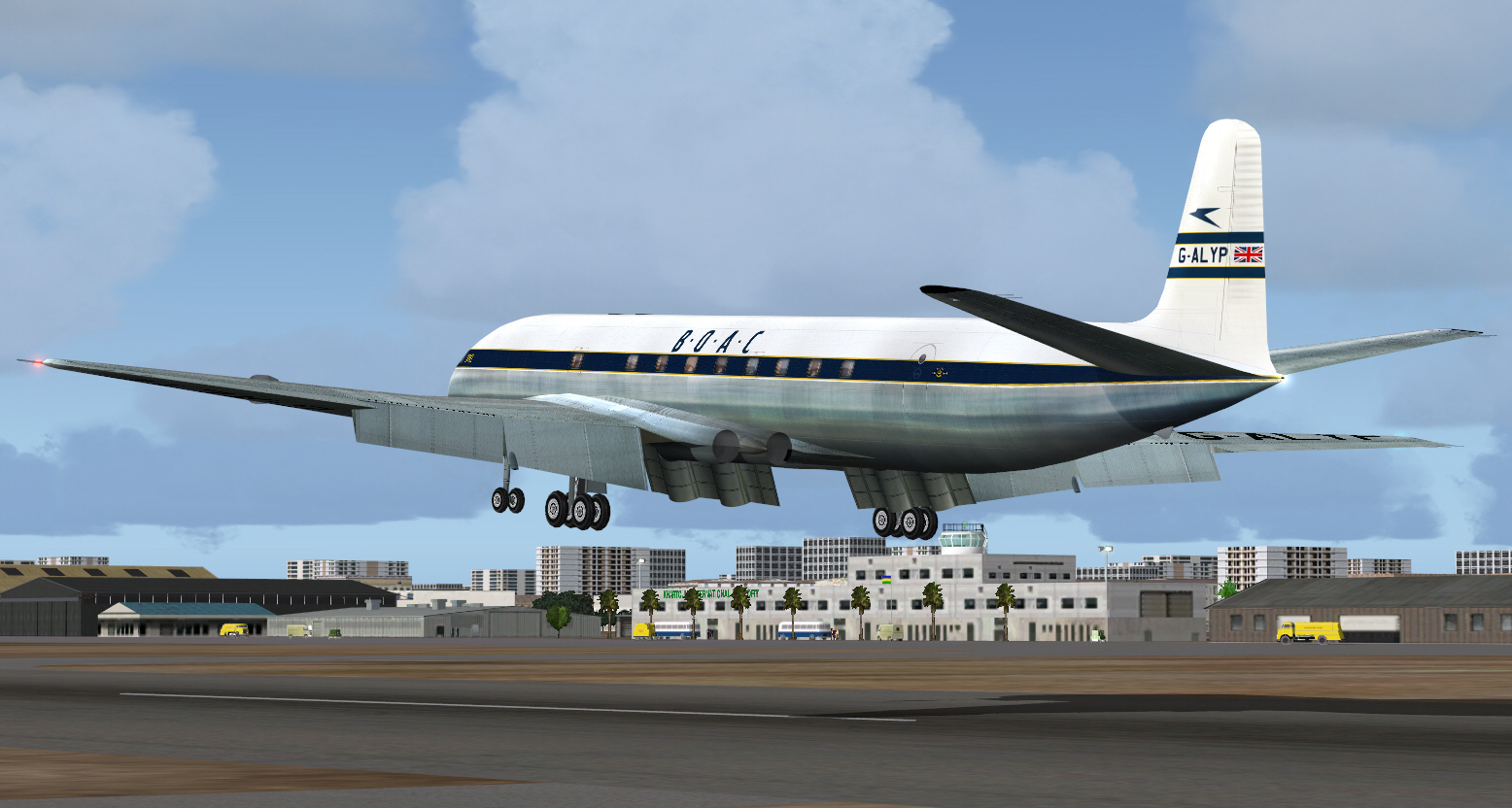 Again .... this route followed a VOR track continuing almost due south after departure from Khartoum and for the first less than 200 miles DME, skirting the remainder of the Nile Valley over southern Sudan, and on into Uganda, to pick up the VOR at Entebbe International Airport (on the northern shores of Lake Victoria) within 180 miles DME prior to arrival. Between 1971 and 1979 Uganda fell victim to the murderous regime of its then political leader Idi AMIN "Da Da" (it's estimated up to 500,000 people disappeared without trace under AMIN's violent and tyrannical dictatorship). I'm not sure, but, I believe the terminal building evident within these next images is possibly the one (the old airport terminal by the 1970's) where Jewish hostages were held following the Black September hijacking of AIR FRANCE flight 139 on June 27th 1976 (operated by A300B F-BVOG), and prior to the Israeli "Operation Thunderbolt" assault on this terminal, on July 4th 1976, and which resulted their release .... albeit with a few fatalities among the hostages and assault/rescue team.

The "IDI AMIN" song (popular "in NZ" during the mid 1970's)
https://www.youtube.com/watch?v=MFeJJAQPiK4
AMIN's only known reaction to this particular song is reputed to have been .... "DA PEOPLE HOO WOTE AND POBLISHED DAT SONG DAY ALL SHUD BE SHOT FOR DOING DAT" .... or words to similar effect This was the shortest sector of the entire route to Johannesburg .... only some 300 miles or so .... and following a south-easterly VOR track from Entebbe, across northern part of Lake Victoria, and into Kenya.

Following departure from Entebbe the enormity of Lake Victoria was evident throughout the first portion of this particular easterly route. Lake Victoria is not only the worlds largest tropical lake, but also, the largest lake on the African continent too, with a surface area of some 27,000 square miles and maximum depths ranging from 150 FT to 300 FT. It is also the worlds 2nd largest fresh water lake source too .... after North America's Lake Superior. This was the longest sector over the entire route .... a distance of just under 1,500 miles .... following a south-south-westerly VOR to VOR track across Tanzania, and the southern tip of Zaire, and on into Zambia. It was also quite a rough ride for most of the flight down given the weather scenarios I'd created, but, which is probably "to be expected" whilst overflying this particular tropical region of the African continent.

Negotiating tropical weather build-ups to the north east and during a staged descent prior to arrival at Livingstone: 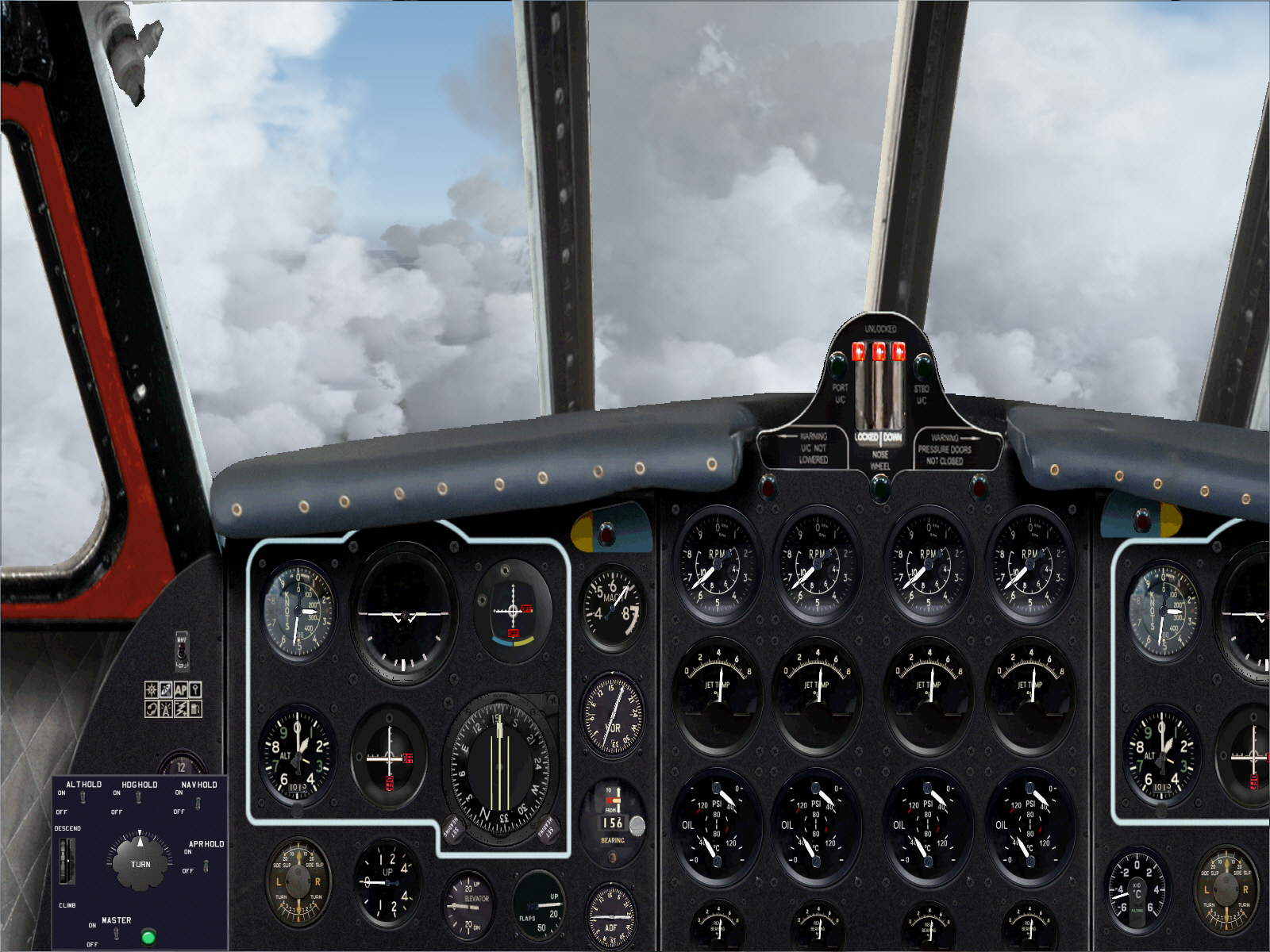 This final and south-south-easterly sector to Johannesburg was another relatively short route of around 500 miles .... or so .... trending across the borders of both Zimbabwe, and Botswana, before entering the Republic of South Africa, to pick up the Johannesburg VOR within 180 miles DME prior to arrival at Jan Smuts International Airport. It was also a great deal smoother than the previous days routing

Following departure a quick detour was made to view the Victoria Falls, on the Zambesi River, a very short distance to the south of Livingstone International Airport. The Victoria Falls straddle the borders of both Zambia, and Zimbabwe, and are "the largest in the world" .... some 5,500 FT in width and 300 FT in height. The spray from these falls provides 24 hour rainfall to the surrounding lush jungle vegetation and it is one of few places in the world where a "moonbow" (nocturnal rainbow) phenomenon may be observed during certain meteorological conditions .... This was an appreciably long exercise (some 18 hours total flying time .... and all undertaken in real time too although dispersed over several consecutive days), but, one that was (I feel) as educational as it was also enjoyable to fly, so, I encourage everyone (whom wishes to) to consider undertaking exercises of this nature using FS

Re-enacting such a long staging route like this the following became very apparent .... (1) the shear geographic immensity of the African continent .... and (2) although I don't know how BOAC rostered its COMET crews to fly this particular route (whether or not crews completed a full tour of duty by laying-over at each stop along the entire route, and back, or if new crews might have been based at various destinations/stations along this route), so, assuming the former, it was likely a "very long tour of duty" and during which these crews were obviously away from home for considerable lengths of time.

Epic post Mark ...feature and history rich. I like the black and white/colour mix.
Also made mention of your good self on the community thread, regarding the banner

I've done a few of these.

This particular one I've published (and previously elsewhere too), but, there's others I haven't .... yet.

And then there's still others, for the COMET 1/!A, I still want to undertake .... and similarly present.

Just a matter of "TIME"