Share your simulated flights around NZ here. The place to post your flight reports, flight plan instructions and progress on tours
Post a reply
6 posts • Page 1 of 1

Flew this double-leg pacific route (it's in the same ocean as NZ right?

) yesterday which is a real world one operated by Asia Pacific Airlines using their B752 freighter. The airline services the Micronesia area in general all the way from Japan (typ. Tokyo Narita) and Hong Kong in the west, through the various Micronesian states all the way to Honolulu and occasionally the US mainland (typ. LAX or Ontario) in the east.

We begin parked on the ground in Guam. This airfield is a joint civilian and US military base (on the other side of the airfield) and sees traffic from various Japanese, Korean and US carriers (United these days, formerly Continental before the merger). Didn't quite get the elevations and jetways sorted but its close enough for now. You can see our aircraft for the day at the far end 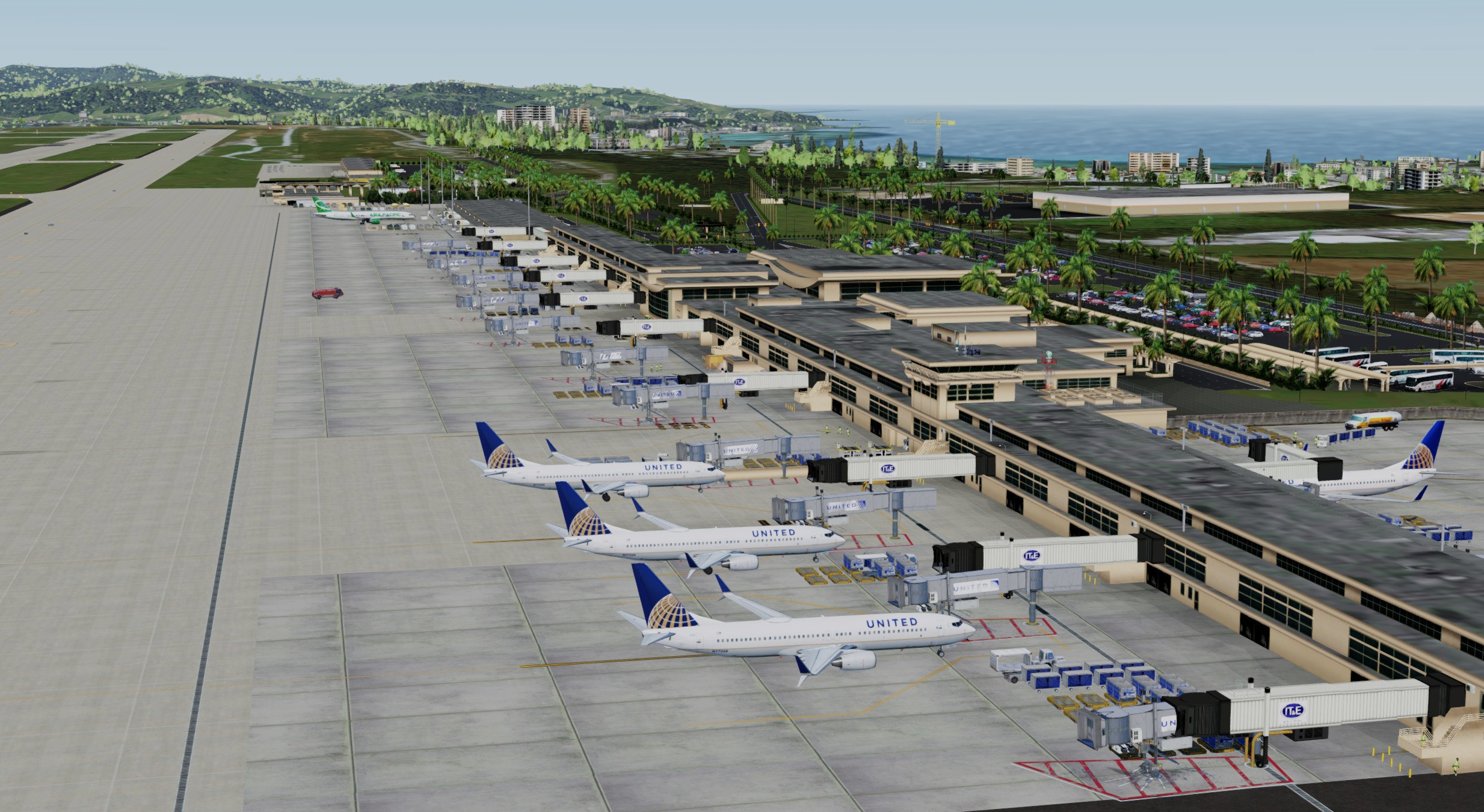 The TDS external model looks great IMHO and some decent liveries avail for it. There is a CS livery for Asia Pacific but its a PAX variant where in real life they operate a PAX converted freighter so this looks the part 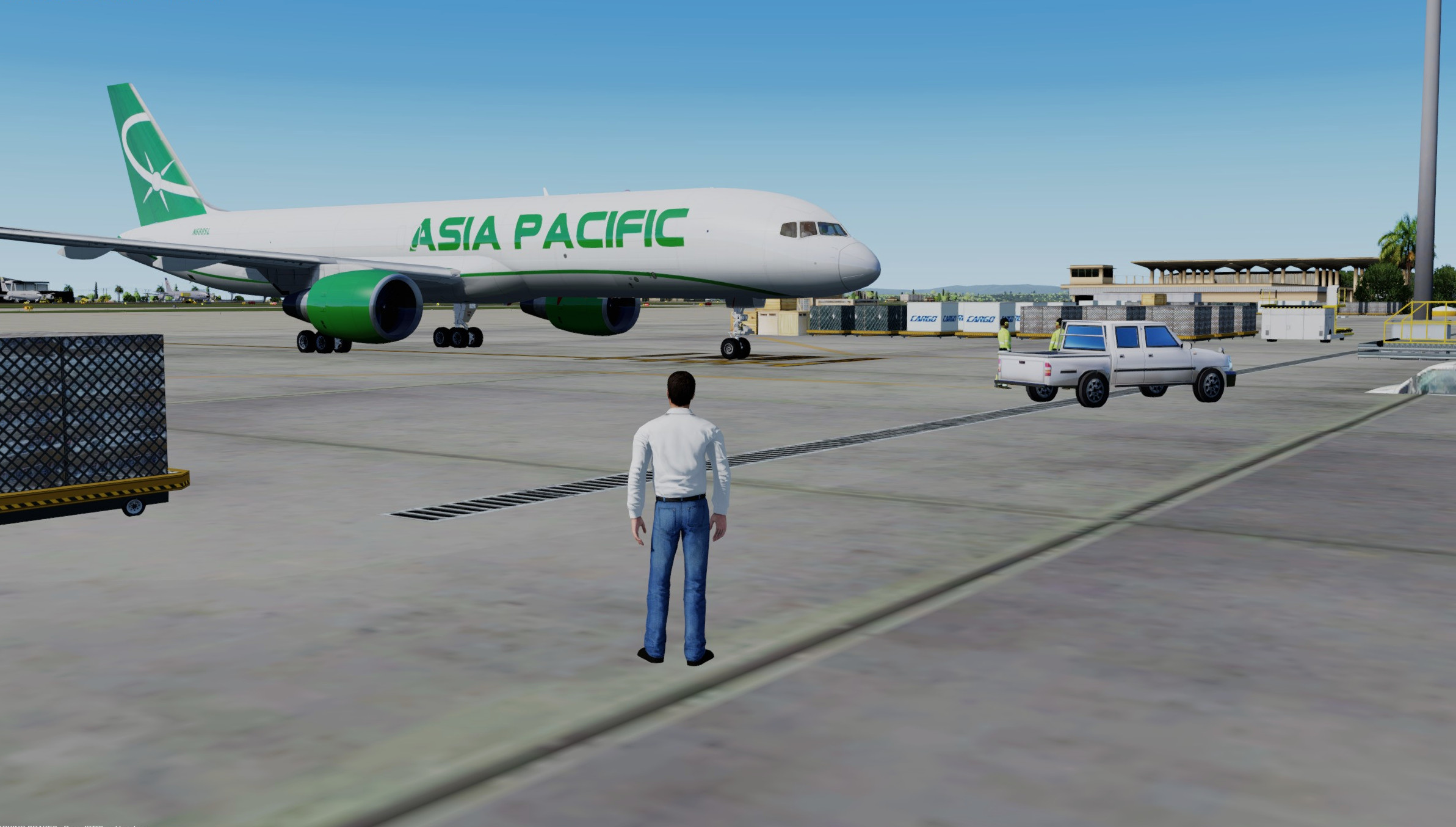 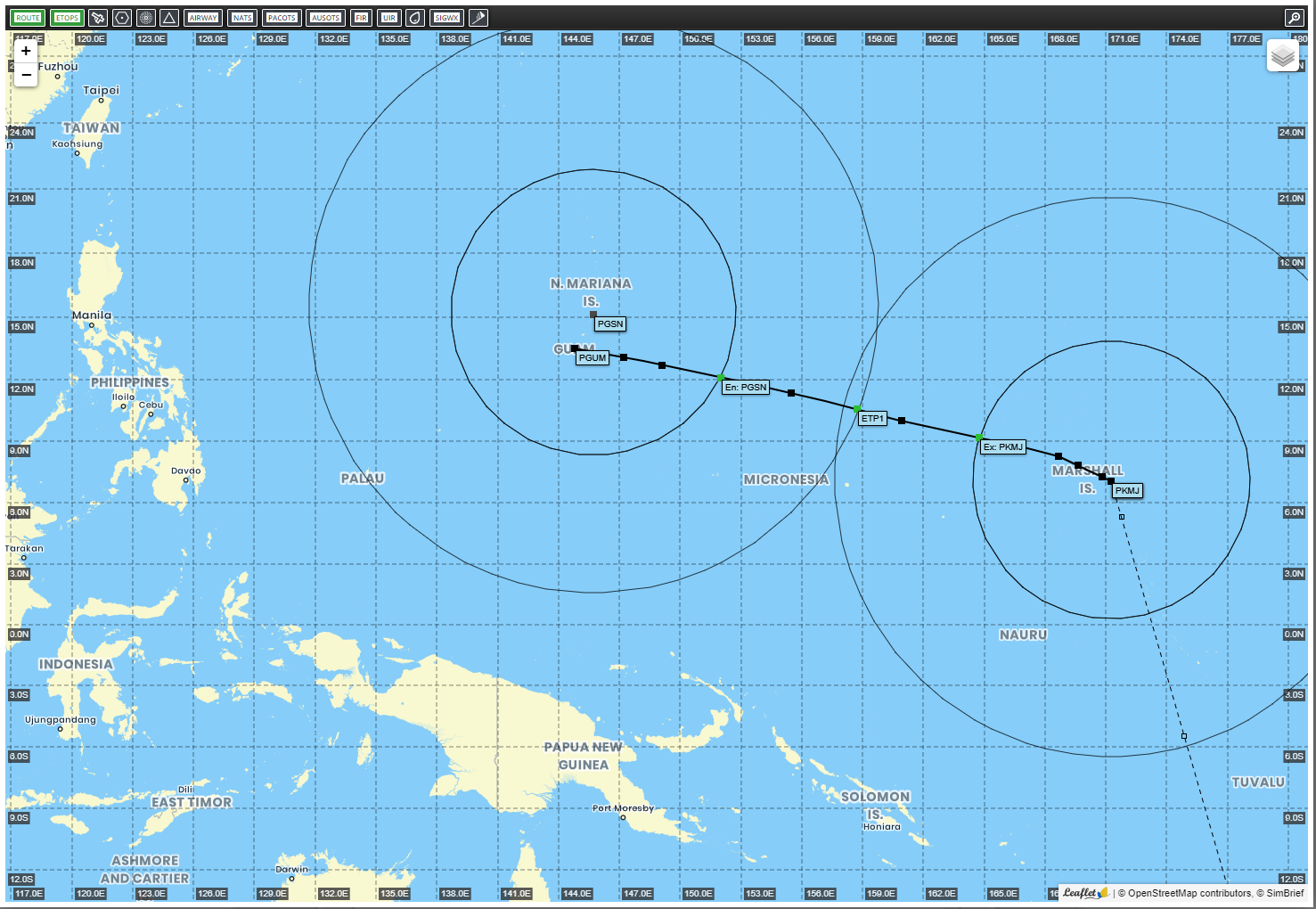 Clear conditions pulling out of Guam heading East for the Marshall Islands. Just before descending to PKMJ passed over an ATR heading in the same direction which you can just make out in the screenshot if you have young eyes, or your specs handy Turning for the final visual approach to RWY7 at PKMJ, no ILS here. Obviously the odd missed approach here given the short runway as missed procedure has a hold pattern to return to if you need to have another crack Not much land to be seen here, an atoll which barely rises above the waters edge. Airport just visible now as the wheels go down and flaps on the way out 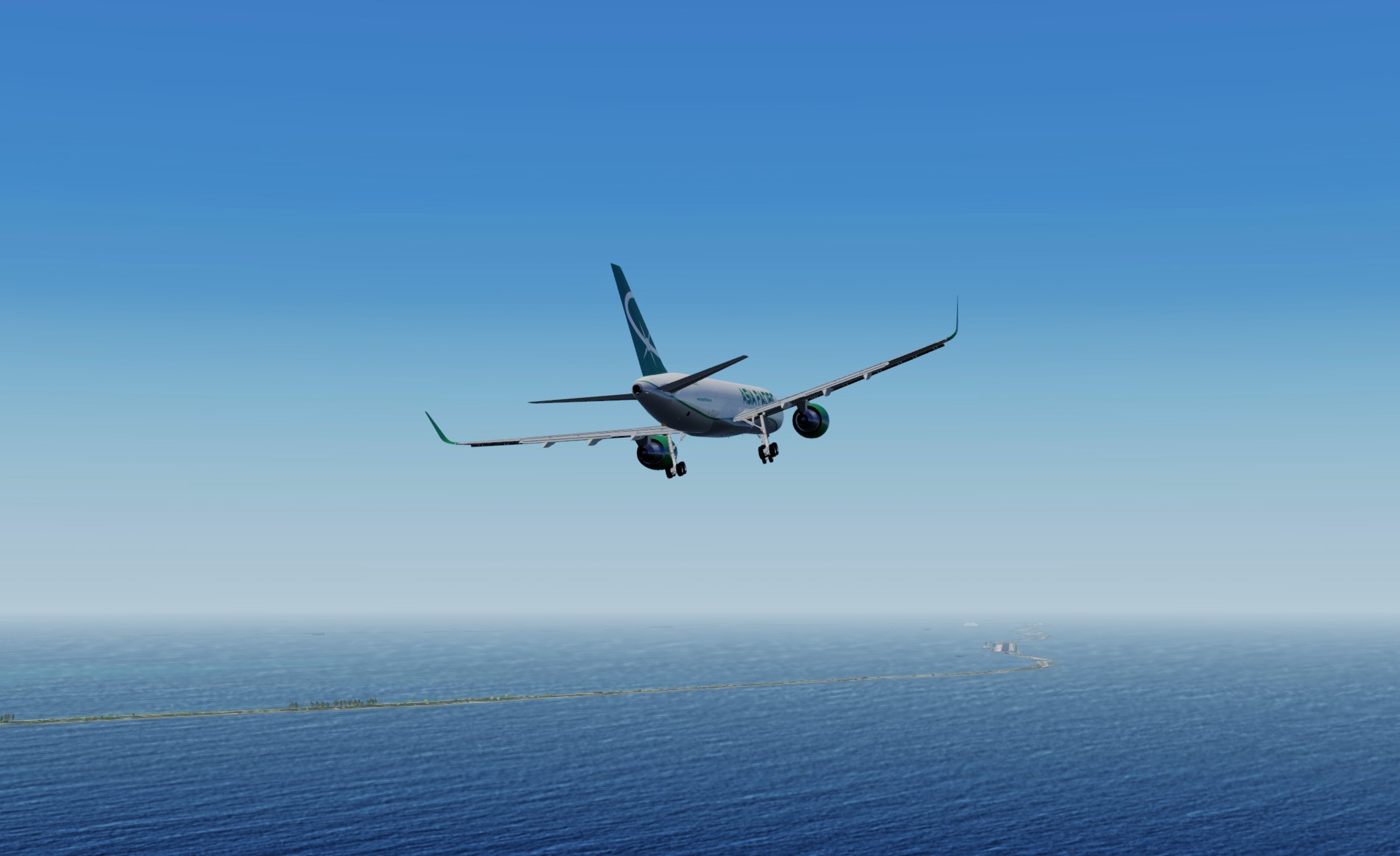 Gimme more flaps Scotty !!! and a handful of Auto-brake !! Nervous much, at least it'll be a short taxi (ignore the gauges on this one, was an analysis/replay mode thing and doesn't seem to show the aircraft state) 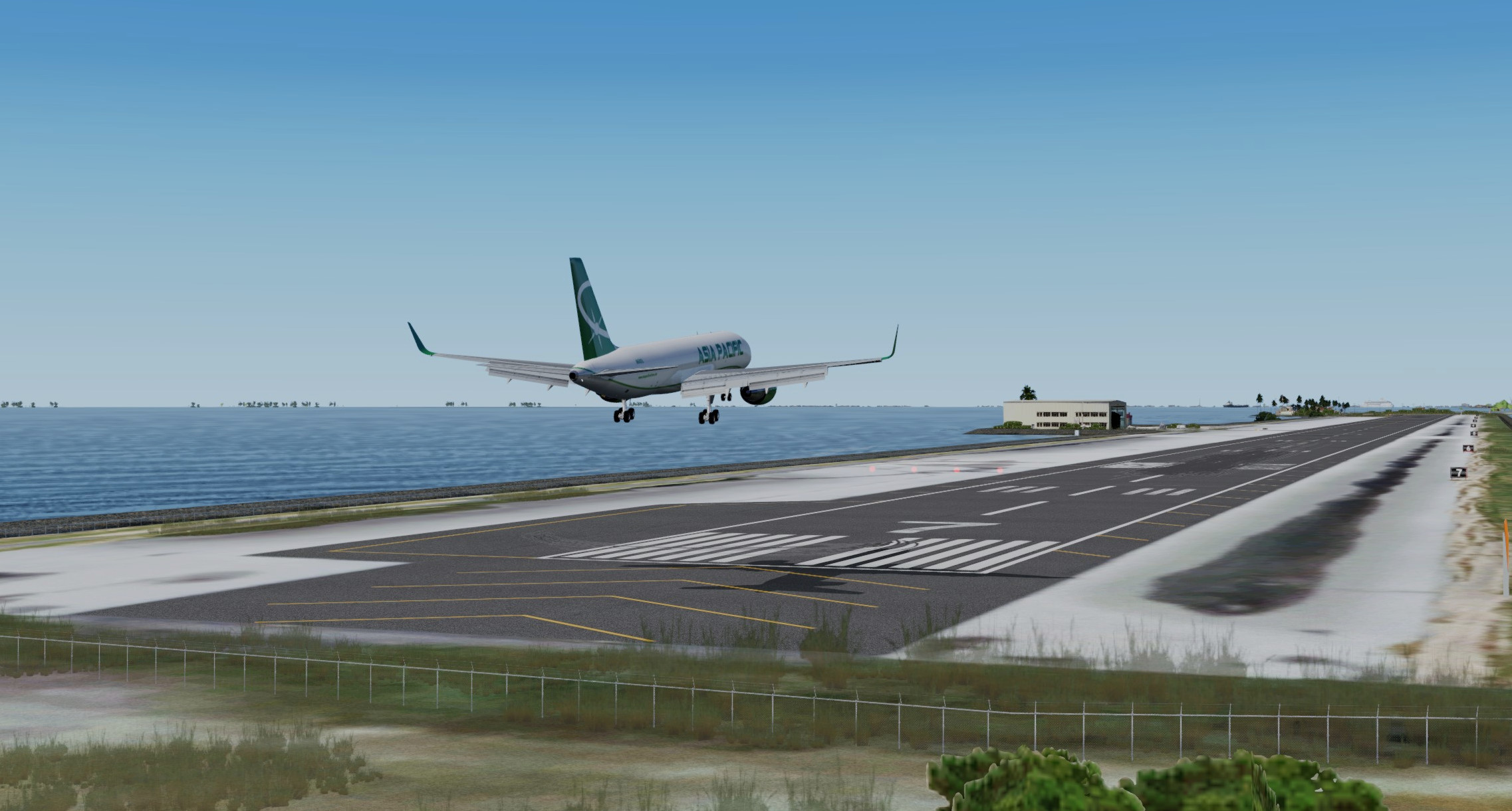 Parked up on the apron. Probably the widest part of the atoll 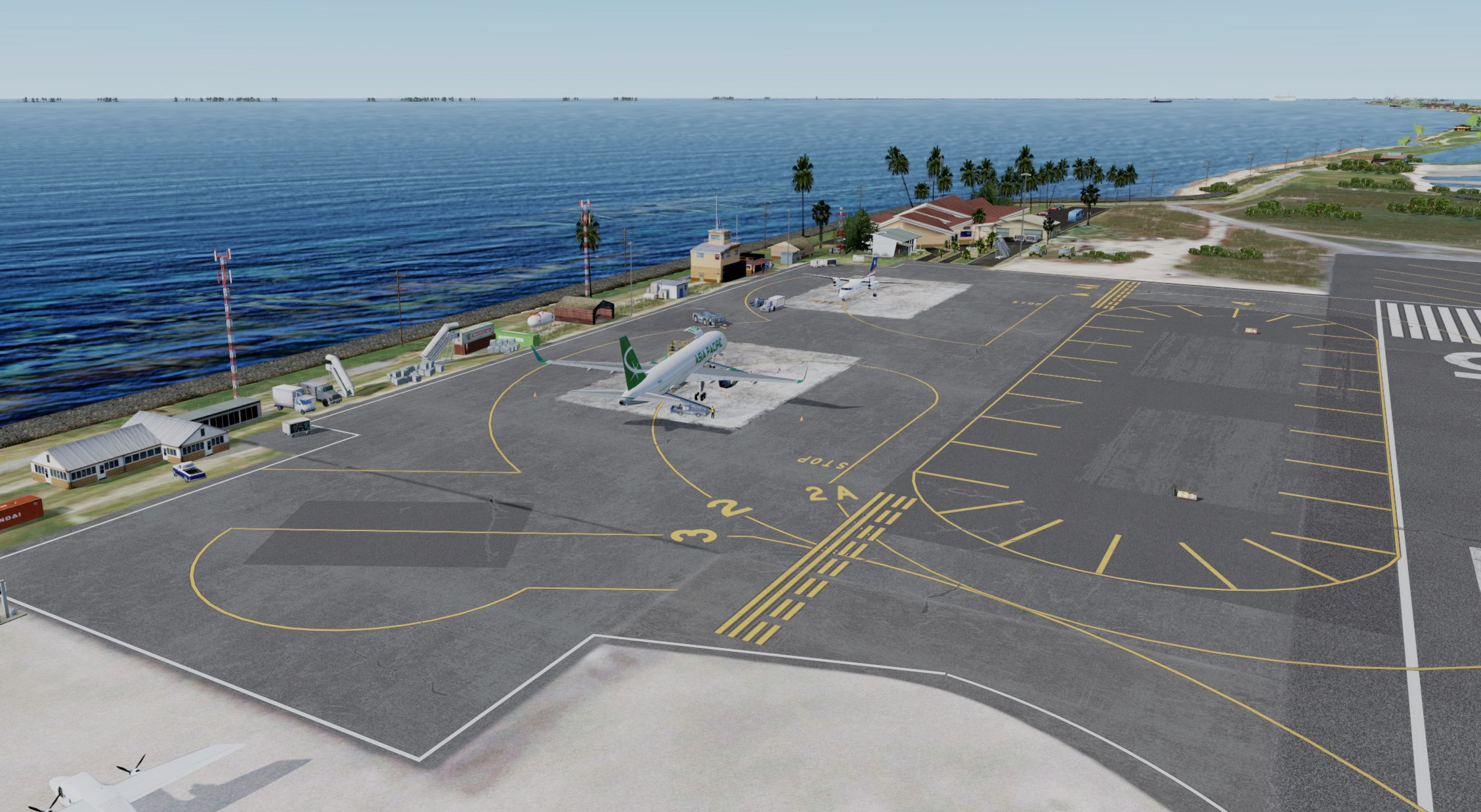 The ATR we passed landed behind and taxiing in Time for a quick dip between legs? 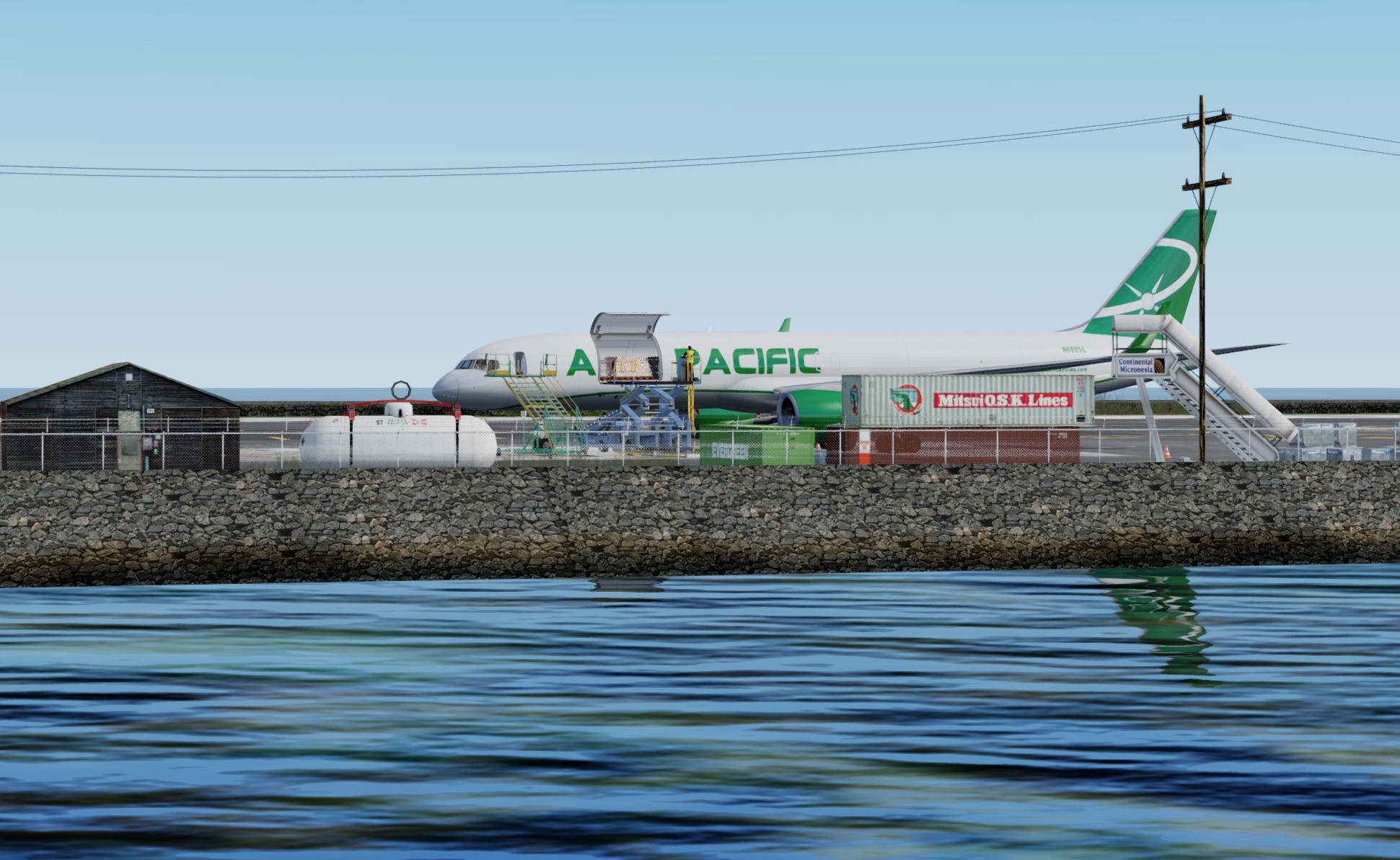 Gratuitous dog leg manoeuvre here for the photo op, to intercept the route on to Honolulu Lovely local network of atolls and reefs, this one next door to the one we departed from. Sunset, halfway through the second leg. P3D lighting starting to show its age I guess, esp compared to MSFS Bunch of heavies from the mainland for company And that's all folks, leaving the handlers to unload the aircraft and hit the hotel thanks for tuning in

Very good. Done the United Island hopper a few times and I hate it with a passion. By the time you get to Kwajalein after leaving Guam at 0700, you're ready to start killing the other people on the aeroplane. That Majuro scenery isn't bad but it is quite inaccurate after you've spent a lot of time there

chopper_nut wrote:Very good. Done the United Island hopper a few times and I hate it with a passion. By the time you get to Kwajalein after leaving Guam at 0700, you're ready to start killing the other people on the aeroplane. That Majuro scenery isn't bad but it is quite inaccurate after you've spent a lot of time there

Haha sounds like fun, yeah will probably do the full hop in the other direction, quite a few legs aye, 8 or so?

I have the PIS Kosrae airport, but haven't been able to find much for Kwajalein/Bucholz, Pohnpei or Chuuk. Lemme know if you come across anything

Sadly noone has updated any of the sceneries through there for a few years, probably not a super popular destination, $$ wise for developers. Have you had a look in MSFS to see if their auto generated stuff is any good?

Yeah, I've not seen good scenery or even usable scenery for any of the other stops. A friend of mine was on an aeroplane that burst two tires landing in Kosrae... they only had one spare. Every time, I was aware that the Aloha 737 that lost its roof was also doing lots of cycles on rough Island airstrips... I'll watch that video later after the stressful parts of my day are done, may give me flashbacks otherwise

Just watching it now, definitely brings back memories. I hated those flights at the time as I was always going to work and a year away from home, although we also referred to it as the 'Freedom Bird' because it took you home again. At the 11 minute mark, you can see a white 500 parked at Maj, they were the machines I did my last tuna contract on. Chuuk, formally Truk, is an amazing dive spot.

chopper_nut wrote:At the 11 minute mark, you can see a white 500 parked at Maj, they were the machines I did my last tuna contract on. Chuuk, formally Truk, is an amazing dive spot.