Share your simulated flights around NZ here. The place to post your flight reports, flight plan instructions and progress on tours
Post a reply
5 posts • Page 1 of 1

I just had the most amazing VR experience in Microsoft Flight Sim, courtesy of The Flying Dad having some FBOs at Coromandel and Waihi Beach which gave me the shove I needed to get into FSEconomy, Kiwi Mace pointing out the the Cessna 208 as a good plane for grinding dollars and really explaining how FSE worked in terms even I could understand, and some serendipitous incompetence on my part.

I was browsing around bits of the world I don't normally fly in for Cessna 208s that ticked a few boxes - not too expensive to rent, high bonus, around 150-200 nm away from their home airport, at an airport where there was a full(ish) load going towards their home airport. It takes a while to find a good fit but I got there, finding a C208 with a high bonus and 11 passengers at YBHI Broken Hill all wanting to be at YPAD Adelaide, and two high value passengers on the way at YREN Renmark which filled the plane.

Then I cocked up the setup and took off an hour before sunset. I don't do night flying. Whoops.

Unless I'm in a complex airliner I more or less fly everything in VR now, and being in a new part of the world I can sit there for hours looking out of the window watching the scenery which is what I did now, thinking how brown it all was and how pretty with the sun rising in the- wait, that's West. Oh god.

Took off from Renmark with the sun on the horizon for the half hour hop to YPAD and on the way the sun set, the sky and the clouds went pink then red then yellow then purple then black, the stars came out, and I wasn't just looking at it on a screen, I was actually sitting in the plane twisting my head around staring at it all with my jaw hanging open. Mind blown. It was like my first takeoff in VR, I actually gasped and oohed and aahed out loud. I really can't do it justice with words.

Arriving in Adelaide at night would normally have ended in disaster but in VR situational awareness is so much better that even I can land properly more often than not - I even flick into VR to land the airliners - so I floated across YPAD and down onto the runway almost like I knew what I was doing and made a (early game) ton of dollars. Winning. 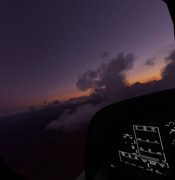 Sounds like you had a ball. What VR headset are you using?
Thanks
Les

What a fantastic experience. When I get around to upgrading my PC and installing MSFS I must look at the VR options.
I believe that DCS in VR is outstanding too.

I have a Reverb G2. Getting a PC together that has the mojo to run MSFS in VR makes the headset look cheap (so much so that I included a UPS in the budget to use as a power conditioner) and you have to accept that you'll need to lean down and get up close to G1000 panels to read the button labels, and looking at pdf manuals or LittleNavmap in flight is a PITA which is why I don't do airliner flights in VR, but it's so worth it. Once you've got it working it will change almost everything you think about flight sims.

I use it for the 3 main flight sims and some driving games and occasionally No Mans Sky, all of which are absolutely transformed, never looked at DCS because there just aren't that many hours in the day.

Thanks for that. Have been looking at the G2 and the Pimax. Its a shame no one VR has all thge major bits in one.