The Magnificent Seven Of Jasta 11

Virtual Vintage Flyers NZ is proud to present the seven Fokker Triplanes of Jasta 11, as seen at this year's highly successful Classic Fighters Marlborough airshow, for Flight Simulator 2002 and 2004.

These are repaints for Frank Elton's Triplane model, and will be available over the next week as I upload them. I haven't quite gotten to the point of doing formations - yet - but I'm sure there are some of you out there mad enough to try it.

Anyway, the repaints are:

The Triplane of Eberhardt Mohnicke.

And finally, the enigma that is the Unknown Aviator, aka Von Doe.

Just uploaded Lothar and Mohnicke, the others will follow. Hopefully by this Friday I should have all seven available through FlightSim.com.

PS - Alvaro Leonardi's Nieuport 11 (on the NZCAR as NK-NIE) has been uploaded too, keep an eye out. 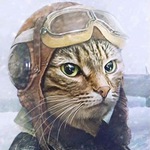 Brilliant mate! This will make for a lot of fun use out of my new Malborough scenery- I can also picture a nice big online formation also... I remember we started a thread about this somewhere before but I can't seem to find it now!
Andy.

Wow nice one Zac ! - I guess some screen shots are in order but have a backlog of things I want to do. I have downloaded the Aeronca repaint - very nice had a few circuits around Marlborough in it.

Cool! I aim to please

Looking forward to those formation shots, Andrew!! Yep, I and I think it was Ian discussed it some time ago, specifically for the Classic Fighters 07 DVD. May have been Robin, I don't remember....

The Unknown Aviator/Von Doe, Lothar and Steinhauser are online, the others are soon to follow. Stay tuned!

ooking forward to those formation shots, Andrew!! Yep, I and I think it was Ian discussed it some time ago, specifically for the Classic Fighters 07 DVD. May have been Robin, I don't remember....

Would it be possible to please post links to your uploads, or even upload them all in a bundle zip file??
Andy.

Hehe....I was originally thinking of a Jasta 11 bundle. Will be coming, but I've only got dial-up ATM, so it may take a while....just one Triplane repaint takes about 15-20min to upload! I am considering free CD releases too....PM if you're keen! Just supply a CD or DVD and I'll take care of the rest.

With Zac's permission, I finally got to upload it to avsim today: meet_the_fokkers.zip

Thats all seven of them together, 18mb
Andy.