A couple more Kiwi classics either available now or soon to be released by HJG.

AIR NEW ZEALAND took delivery of it's first DC-8-52 (ZK-NZA) on July 19th 1965. The airline operated this aircraft until January 1977 when it commenced the retirement of its 6 remaining DC-8-52's fleet having by this time acquired 8 DC-10-30's. During its AIR NZ service this particular aircraft was leased to KLM ROYAL DUTCH AIRLINES .... from May 27th 1969 until September 20th 1969 .... and during which time it first supported the late 1960's era KLM fuselage livery with the AIR NZ tail from the same era and for a short period and prior to supporting full KLM livery later. In KLM service this aircraft was re-registered PH-ADA and named "Anthony FOKKER". 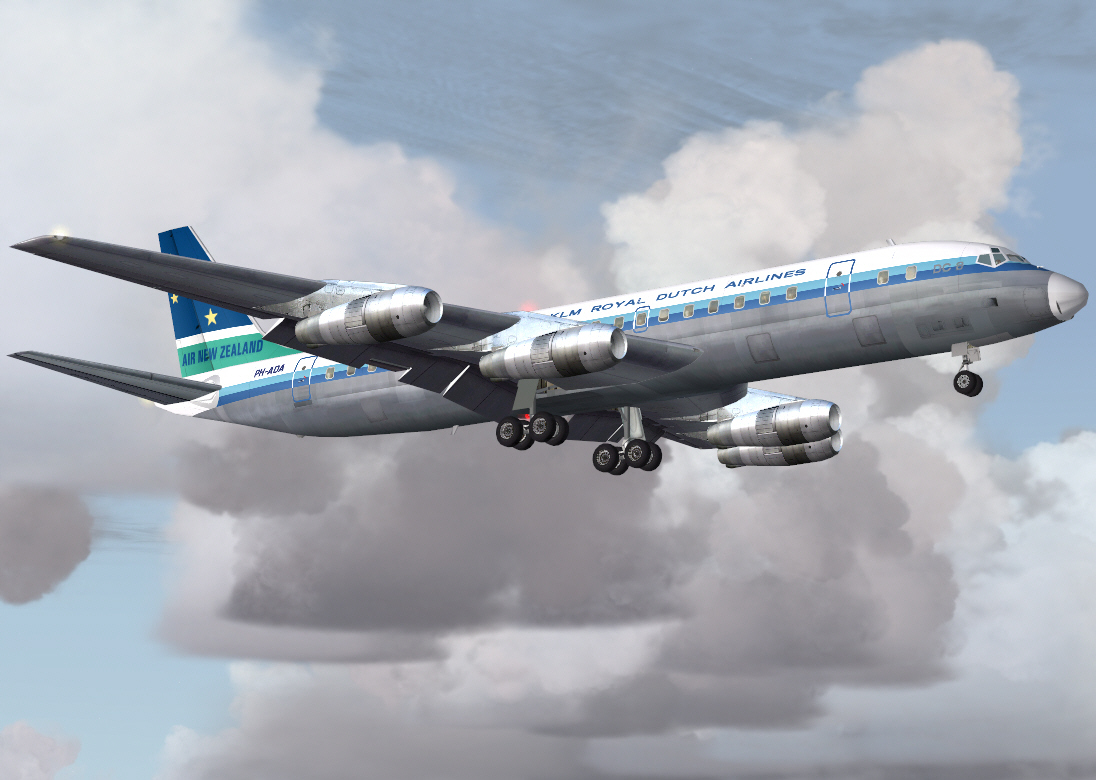 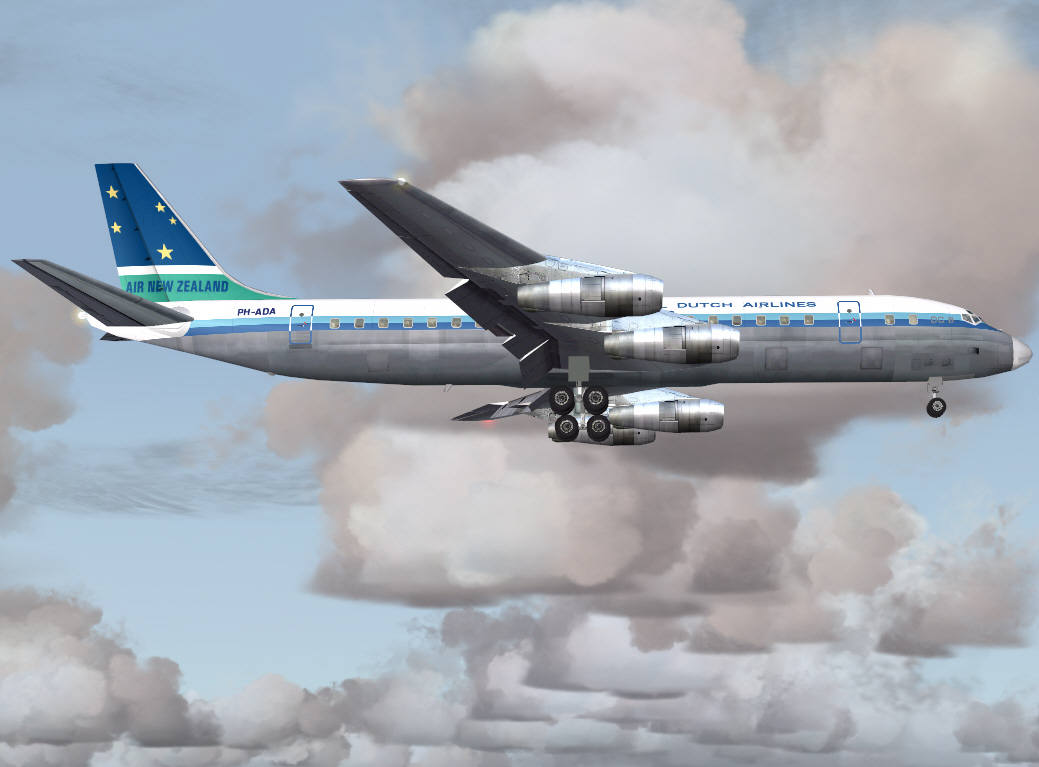 EVERGREEN INTERNATIONAL became a jet operator during 1976 .... acquiring its first DC-8 (N800EV) from AIR NEW ZEALAND (ex ZK-NZG) .... followed by a 2nd ex AIR NZ DC-8 (ZK-NZA) on January 24th 1977. These aircraft were repainted in EVERGREEN livery (featuring the airlines first definitive tail livery version) at Auckland .... and EVERGREEN crews DC-8 trained by AIR NZ also. EVERGREEN operated these aircraft (as well as a 3rd ex-AIR NZ DC-8 also) until 1984. During its EVERGREEN service N801EV was leased to NORTHEASTERN INTERNATIONAL AIRLINES .... from March 1st 1982 until February 15th 1984) .... after which time it was then withdrawn from service and stored at Marana, Arizona, USA, and later scrapped. It seems that EVERGREEN's attempt to commence schedule PAX type DC-8 services was not successful. The airline later became a very successful air freight specialist instead .... operating DC-8-62F and -73F followed by B747-200F freighters. 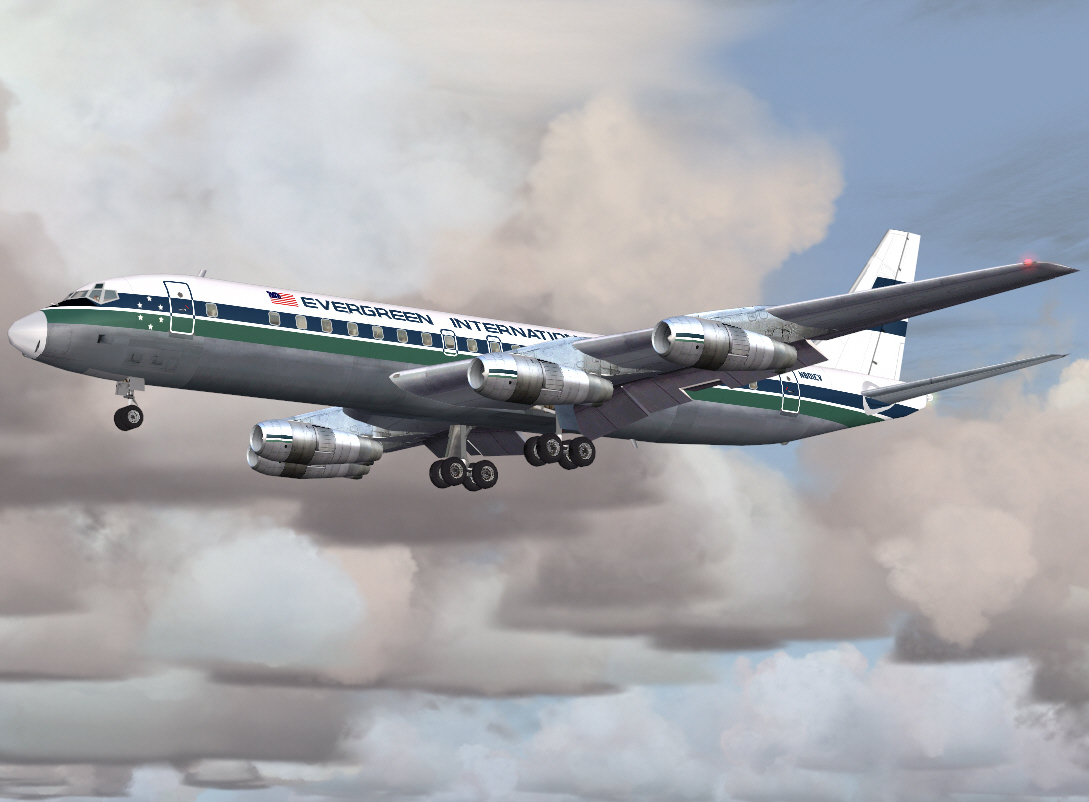 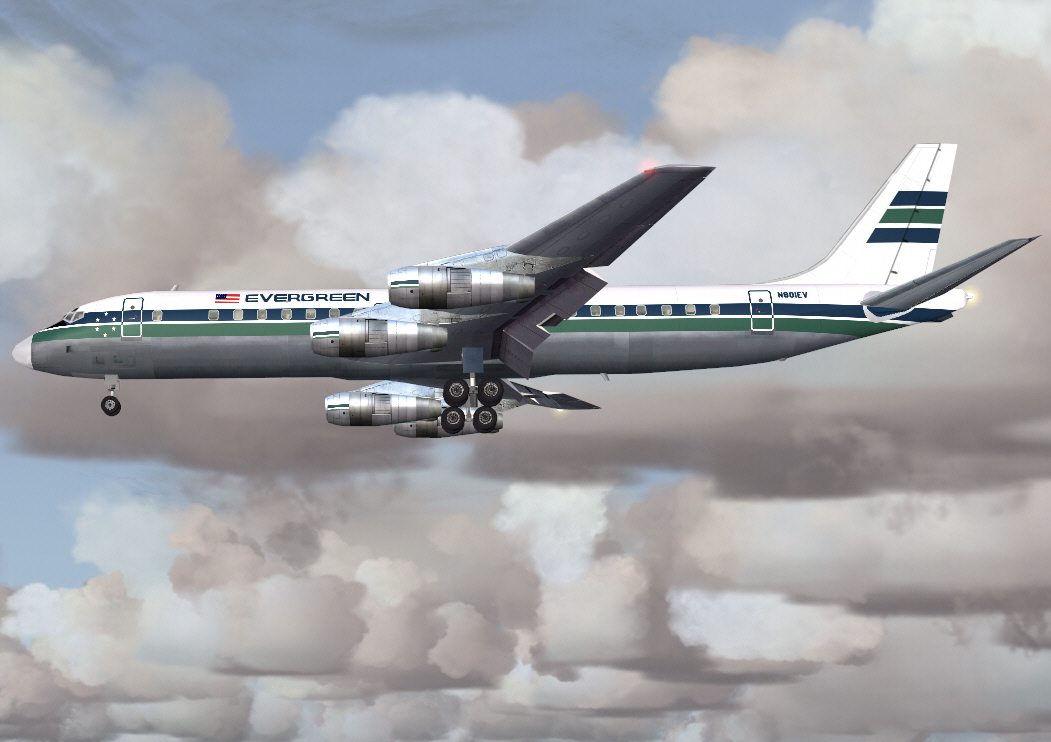 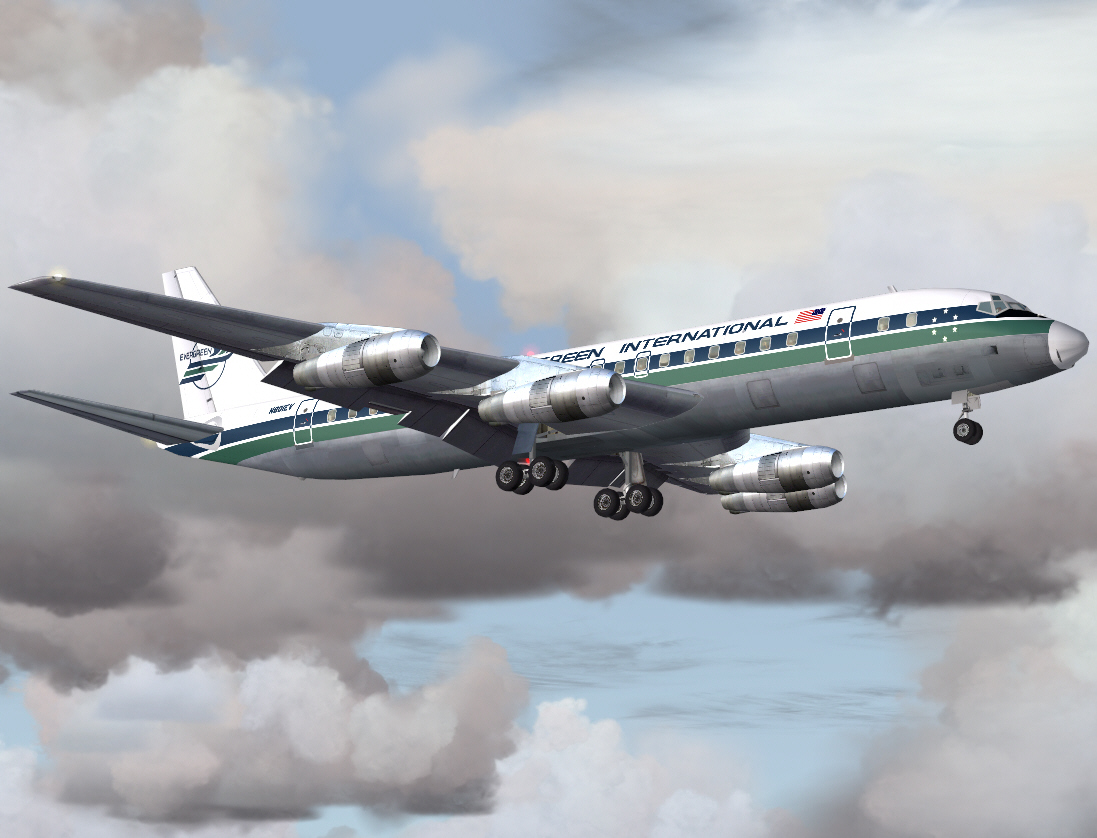 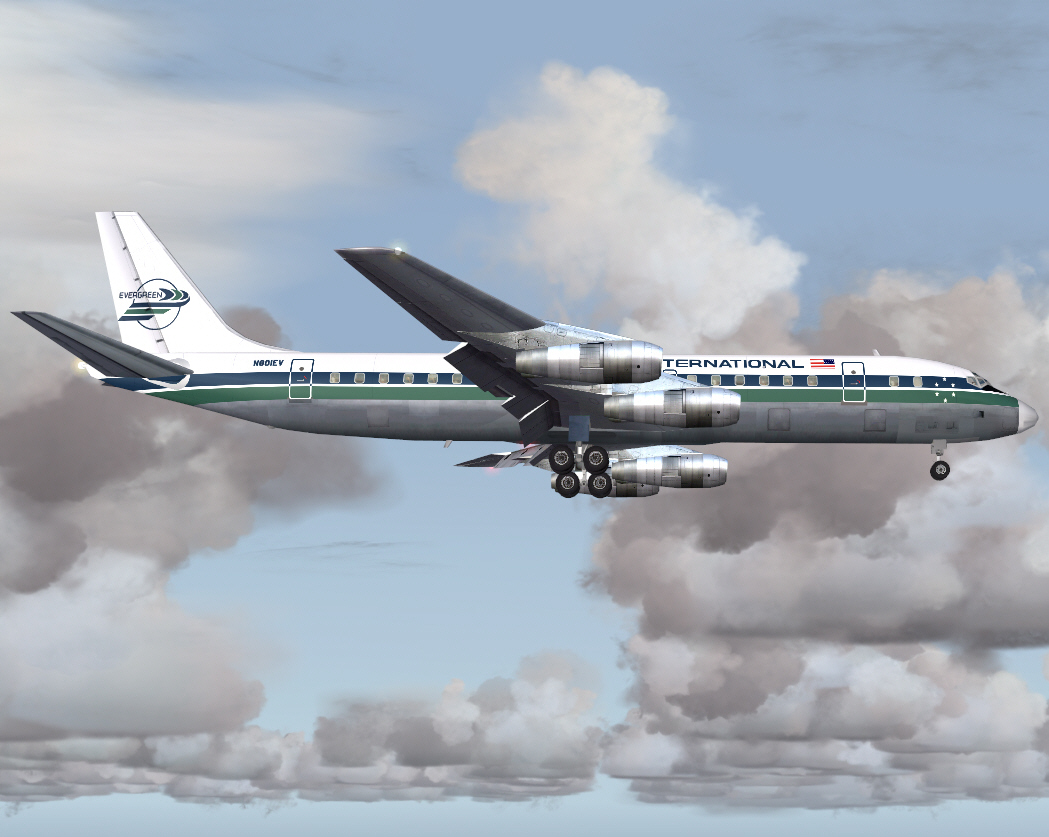 All of HJG's DC-8 Aircraft Base Packs (3D Models and FDE) are FS2004 native and FSX portable.

All of HJG's DC-8 Panels (Gauges and Modules) are FS2004 native and FSX portable .... although the prescribed senginre startup procedures for these panels is FS2004 compatible only .... the desfault engine startup procedurees are recommended for FSX.

All of HJG's DC-8 textures are FS2004 and FSX compatible.

HJG offer "separate" FS2004 and FSX customised Sound Packs for all of its DC-8 simulations .... separate audio versions are essential due to the different sound engines in each of these 2 FS platforms.


These new and upgraded textures aren't publicly available yet but will be released before Christmas.

That's an awesome bit of aviation history, thanks for sharing Mark !! Didn't know about that KLM lease.
Cool repaints too

"IF" interests is apparent then I'll post imagery of these others "assuming we manage to get'em done" .... or if time permits in the case of those already done

This latest addition is actually an upgrade of an existing HJG DC-8 texture .... as is the KLM/AIR NZ hybrid (PH-DTA ex ZK-NZA) also.

Neither of these textures (above) are available for download yet .... and won't be available until HJG's end of year/pre-Christmas releases go live/public.

Still 1 more EVERGREEN DC-8-52 livery to attend to .... and which is applicable to another ex AIR NZ DC-8 acquired by this airline. Might represent ex-AIR NZ ZK-NZF or -G for this next one .... and might further extend these to include the EVERGREEN/NORTHEASTERN (also ex AIR NZ DC-8's) livery too.

Just see how we go.

These above presented textures .... and their supporting aircraft base packs (3D models and FDE) too .... are both FS2004 native and FSX portable. 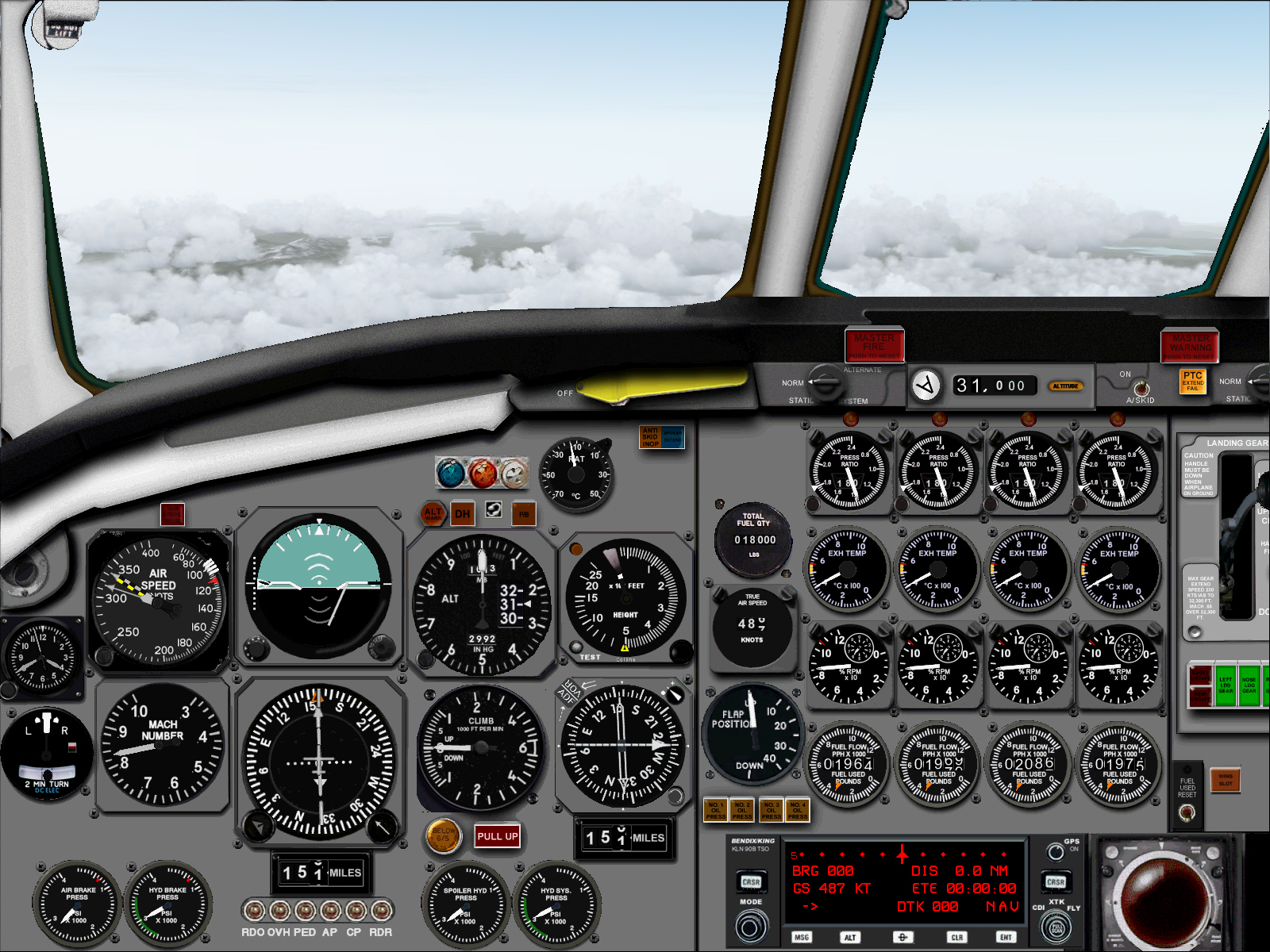 The customized FS2004 engine startup routine (GPU and air assisted) may not work as prescribed "in FSX", but, using the standard FSX default engine routine will more than adequately suffice.

"Separate" FS2004 and FSX version customized P&W JT3D-3B sound packs (these are all recorded .... both externally and internally .... from these actual actual aircraft .... even faithfully capturing the distinctive/classic DC-8-50/-61 startup "howl" although I suspect most here are probably too young to have ever heard or let alone remember it

Excuse Benoit's "missed approach" in the above demonstration videos

.... the result of wind shear at the last/worst moment, but, the "safest" response under the circumstances

ALSO: Be aware that the AIR NZ textures featured within the above video/s are HJG's old/original versions .... which have all since been "REDONE" with far greater "QUALITY" and "ACCURACY" than those offered prior to 2015 .... 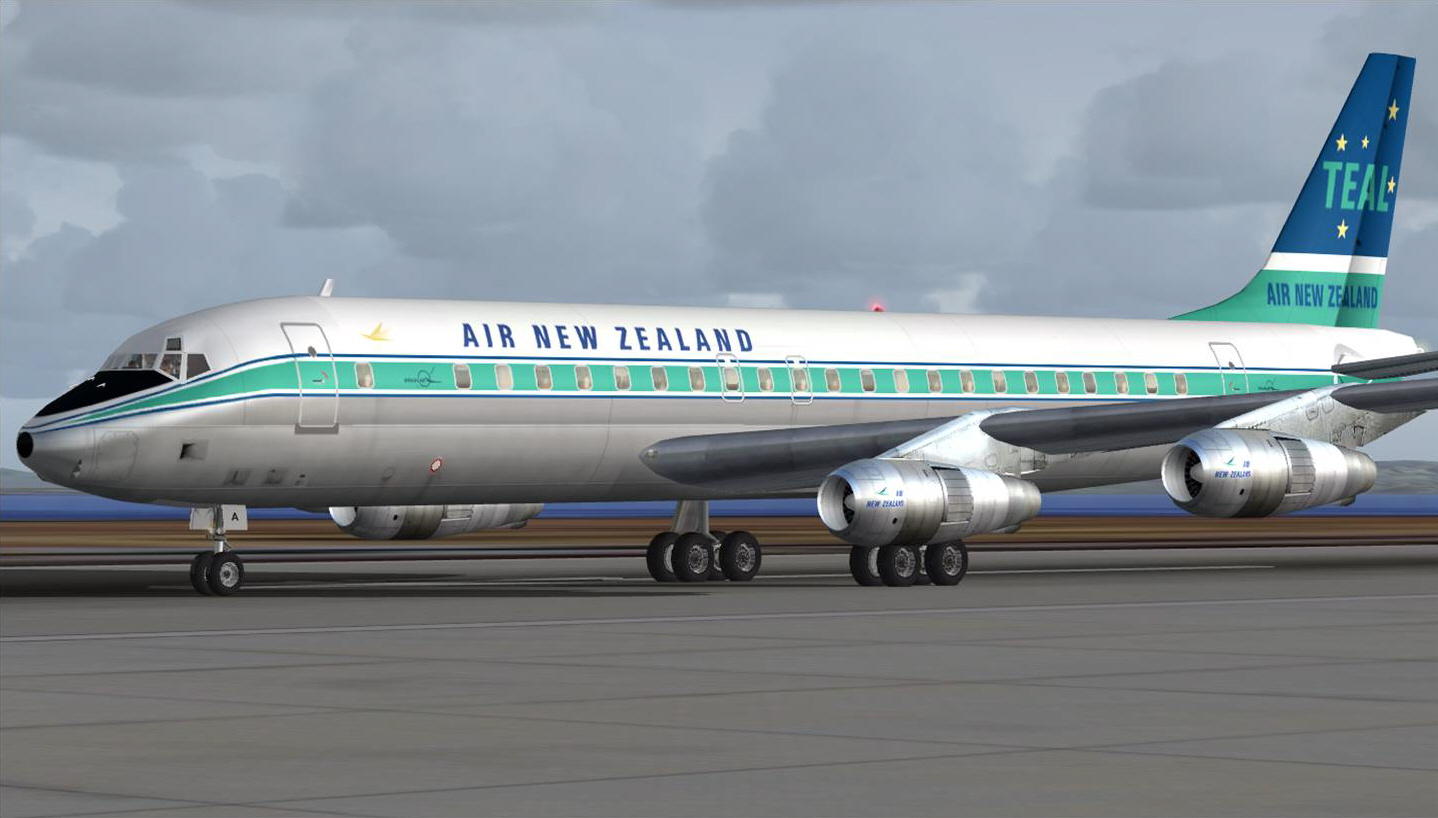 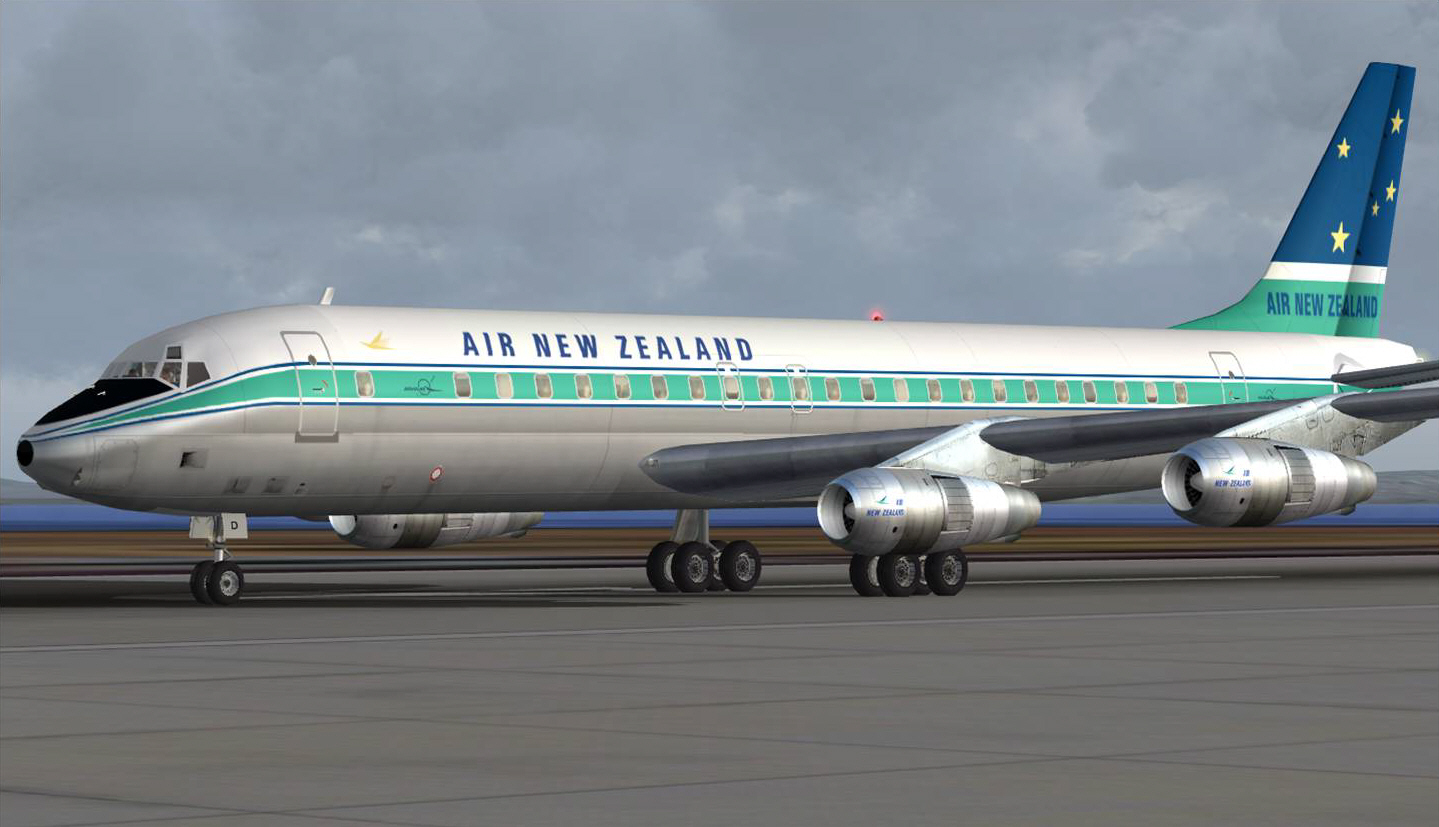 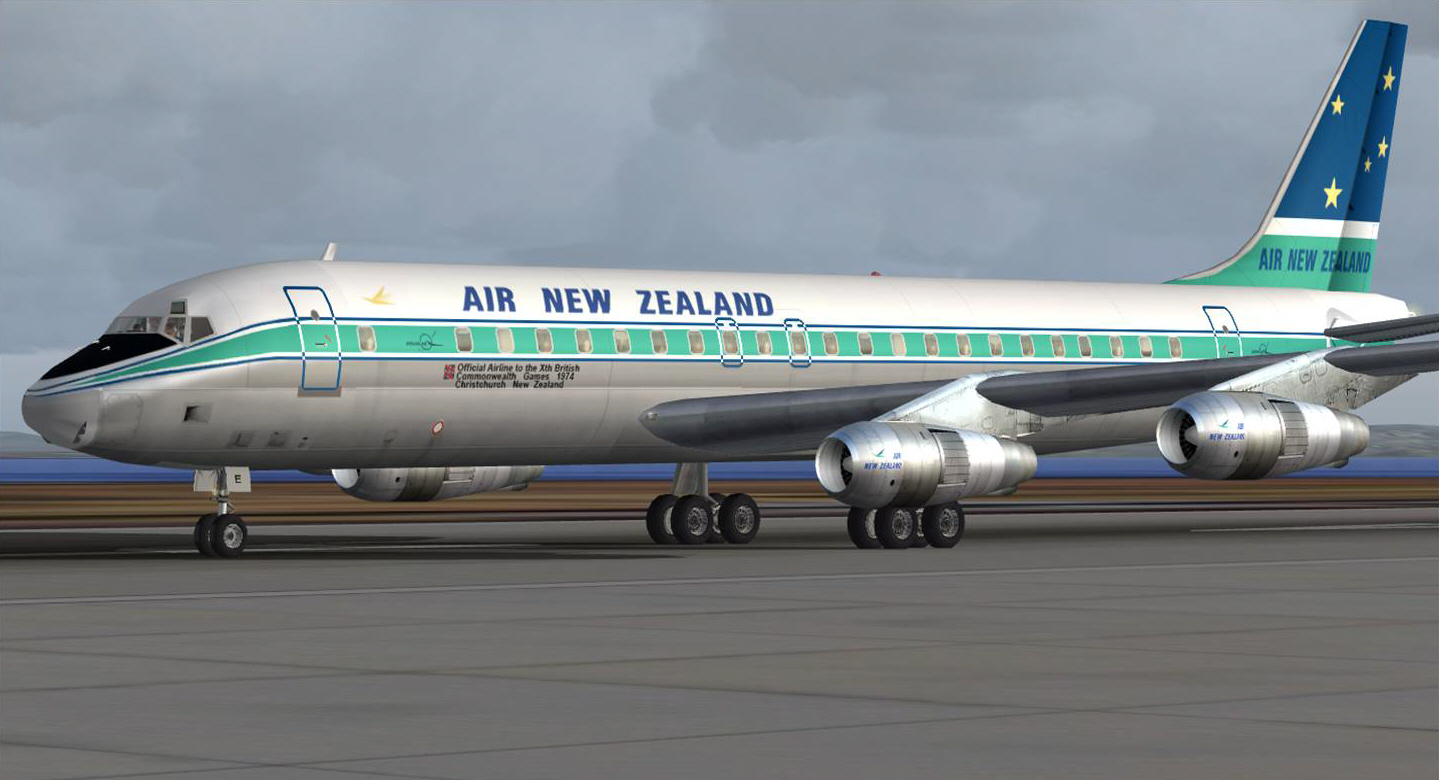 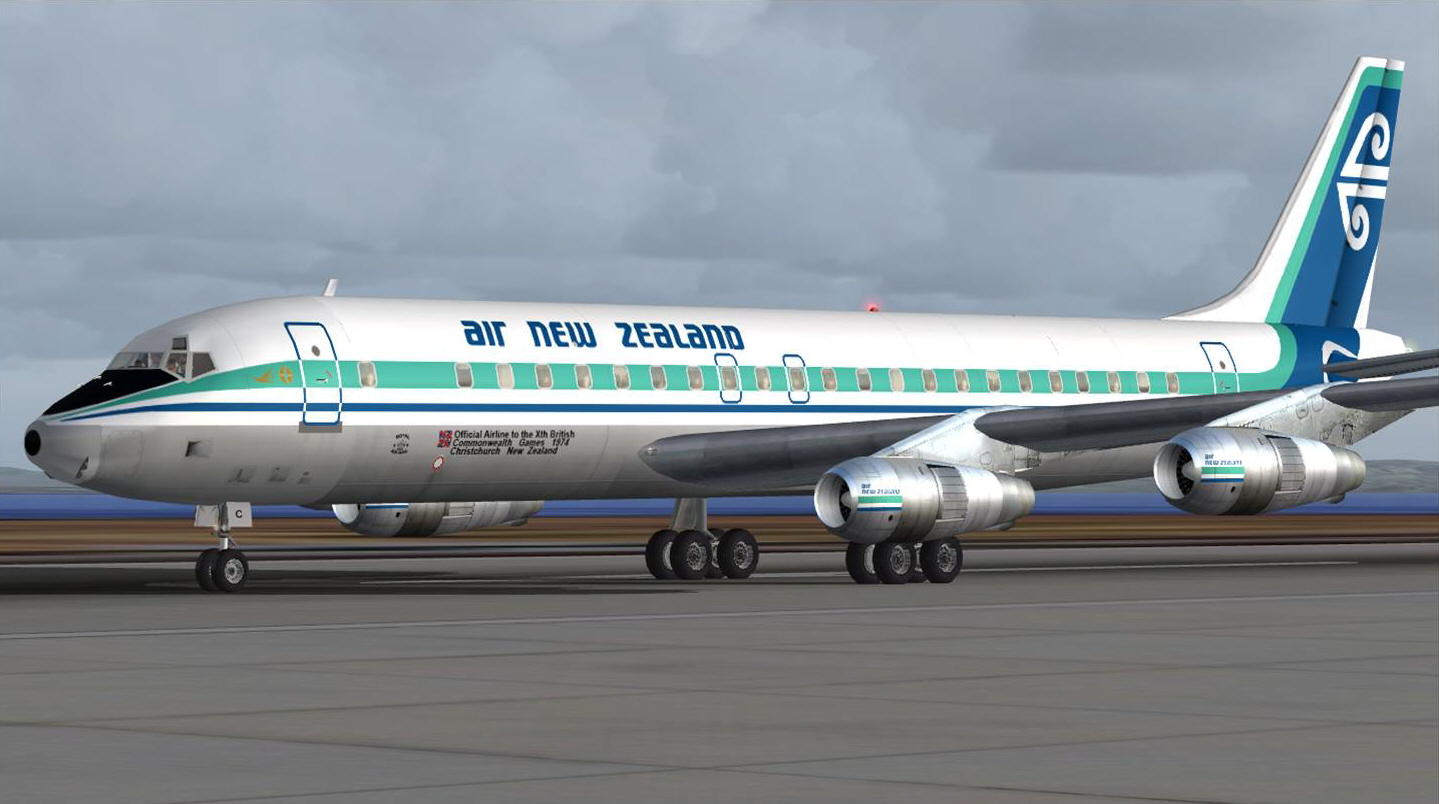 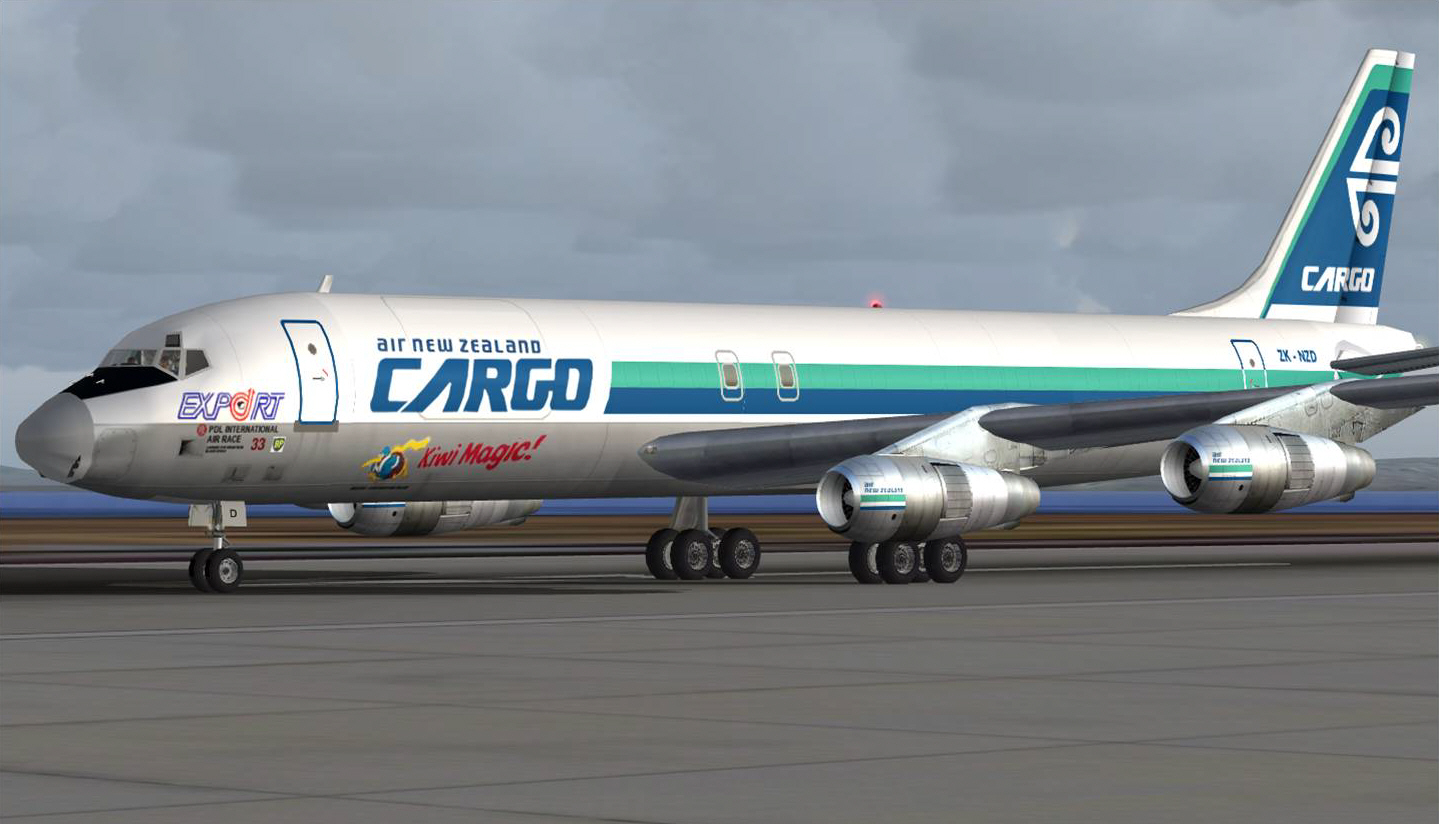 All major variations of AIR NZ livery (from 1965 until 1986 .... there were quite a number of adjustments to these within this period) applicable to both the DC-8-52 and -54F are represented as such.

Each of these files are available from the following HJG Downloads pages ....

"DOUGLAS SOUNDS" .... both sound pack options and which are separate "FS2004" and "FSX" specific files customized not only for the P&W JT3D-3B engines, but also, for the sound engines of both FS versions.

Compliments of this festive season to everyone on behalf of HJG .... whom "might" also have a wee bit more to offer (in addition to its December/Christmas 2019" website update of 2 to 3 days ago") and "prior to" Christmas.

Just see how we go for time.