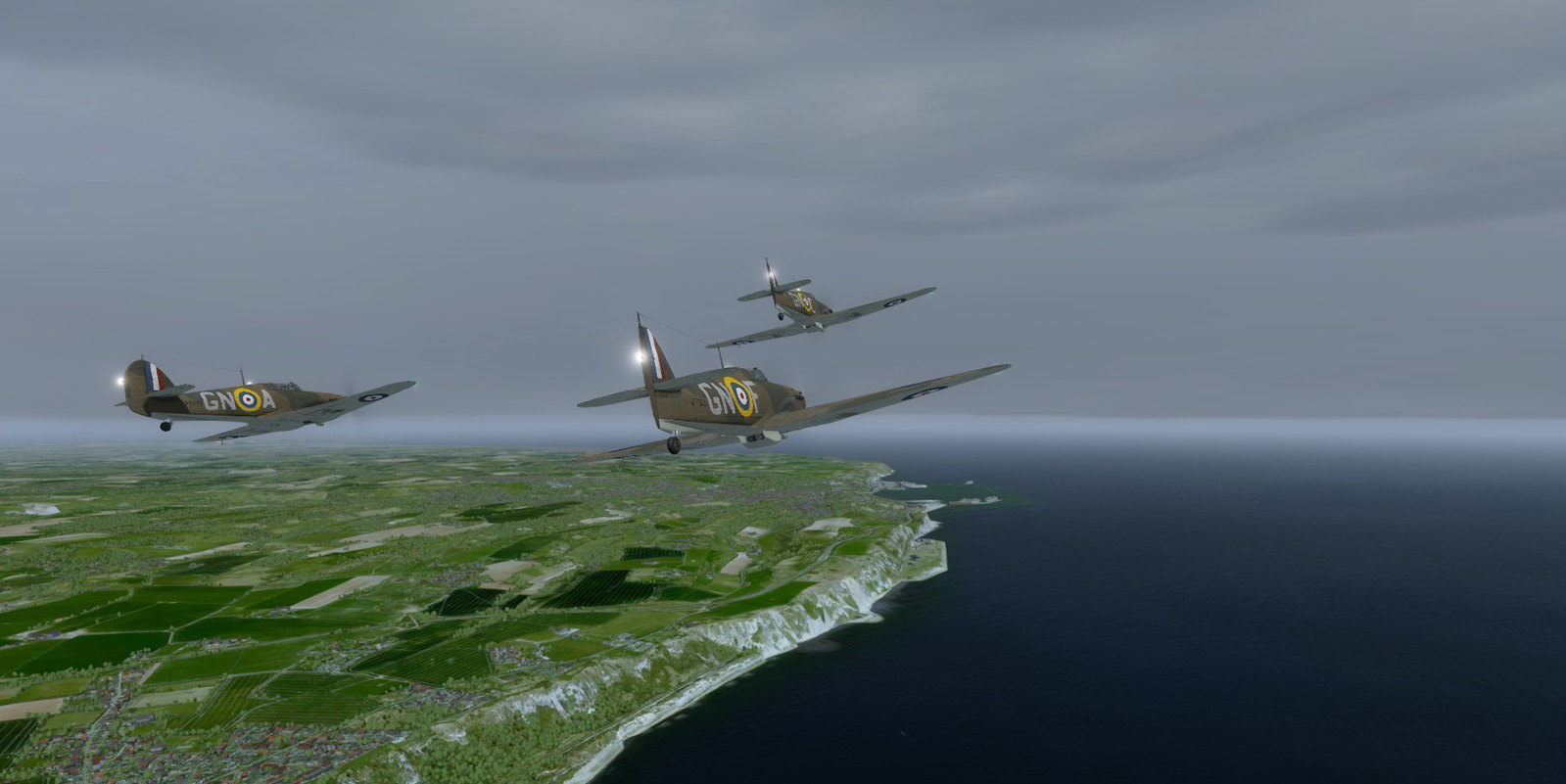 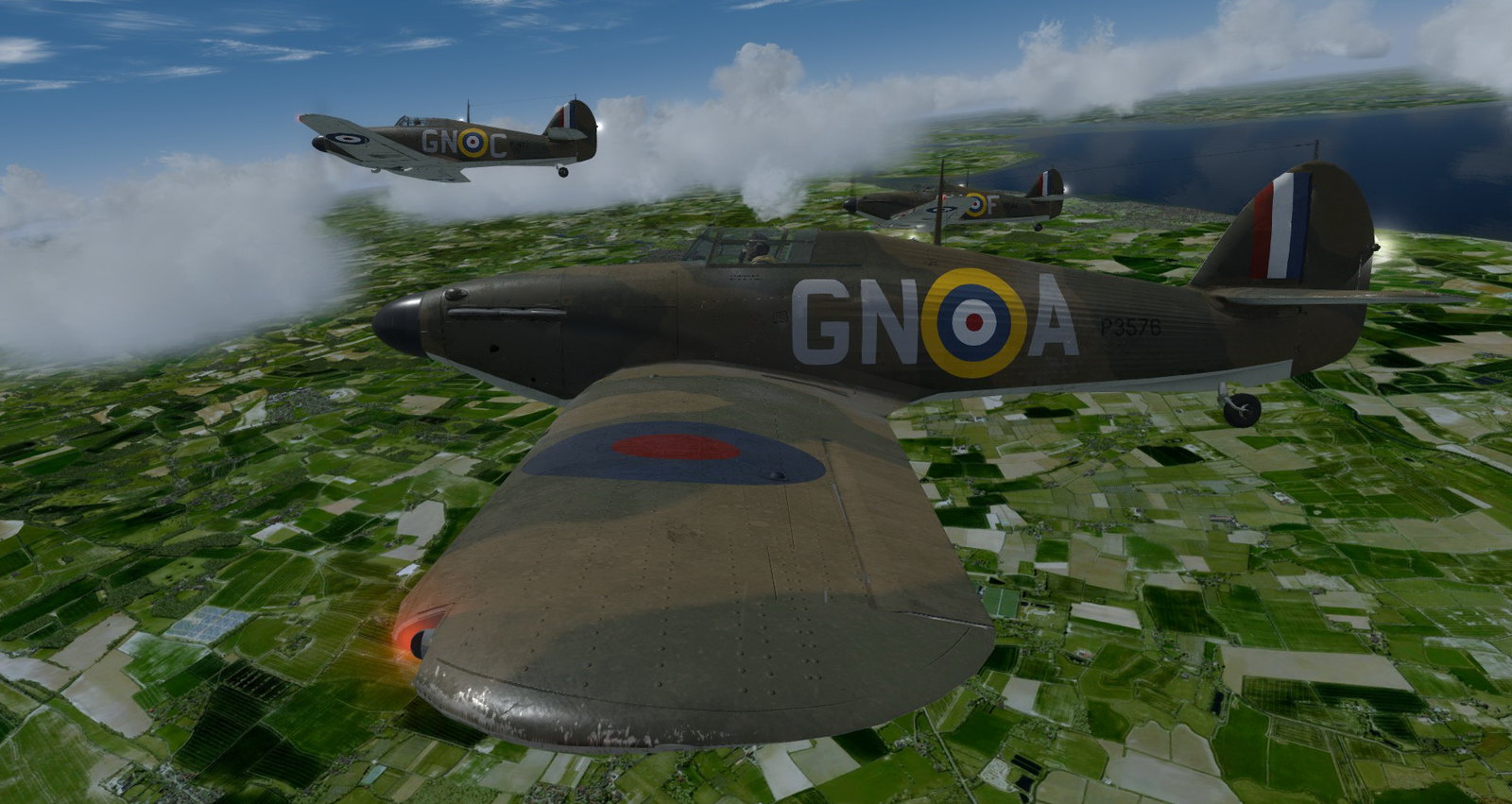 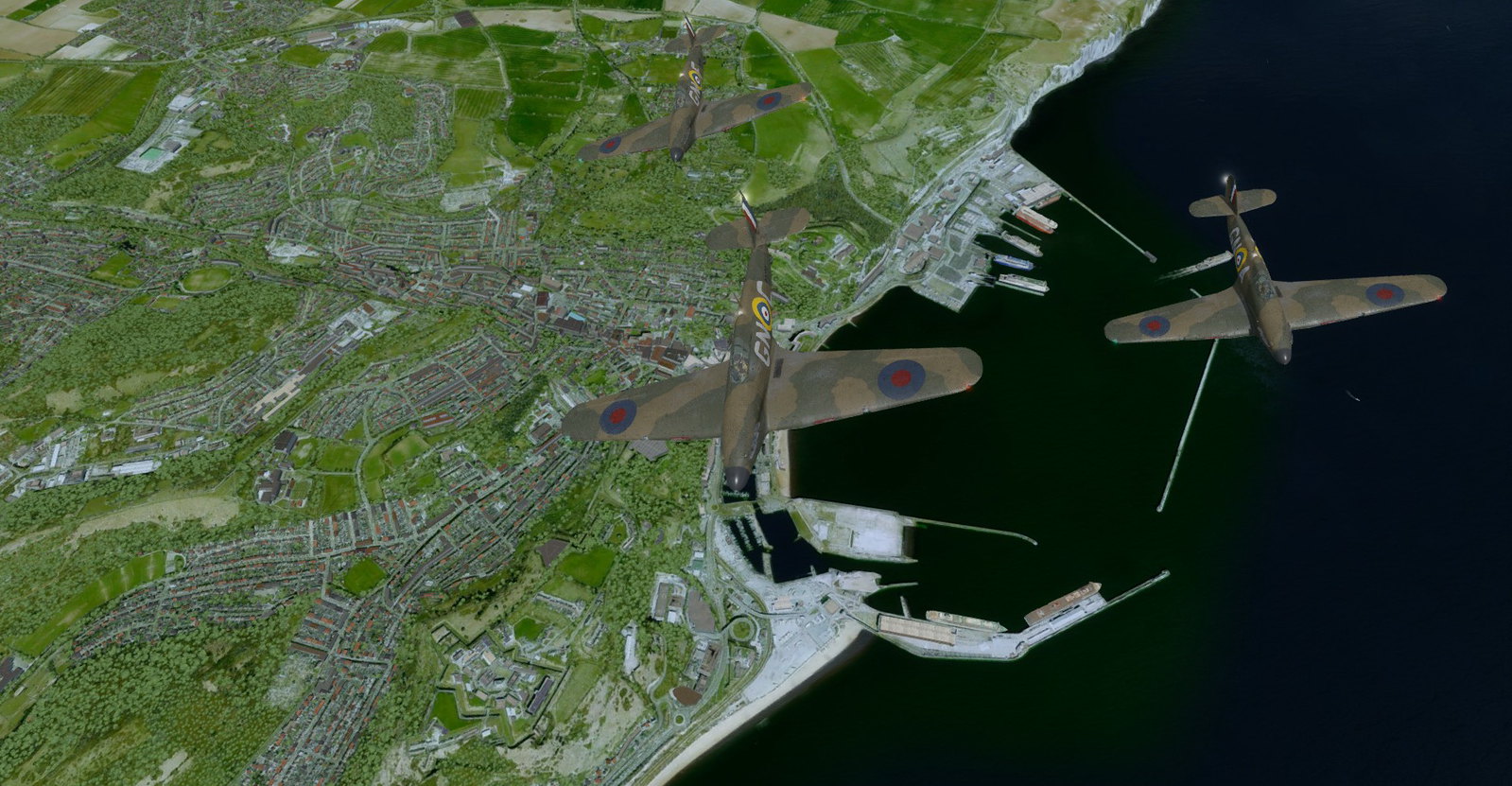 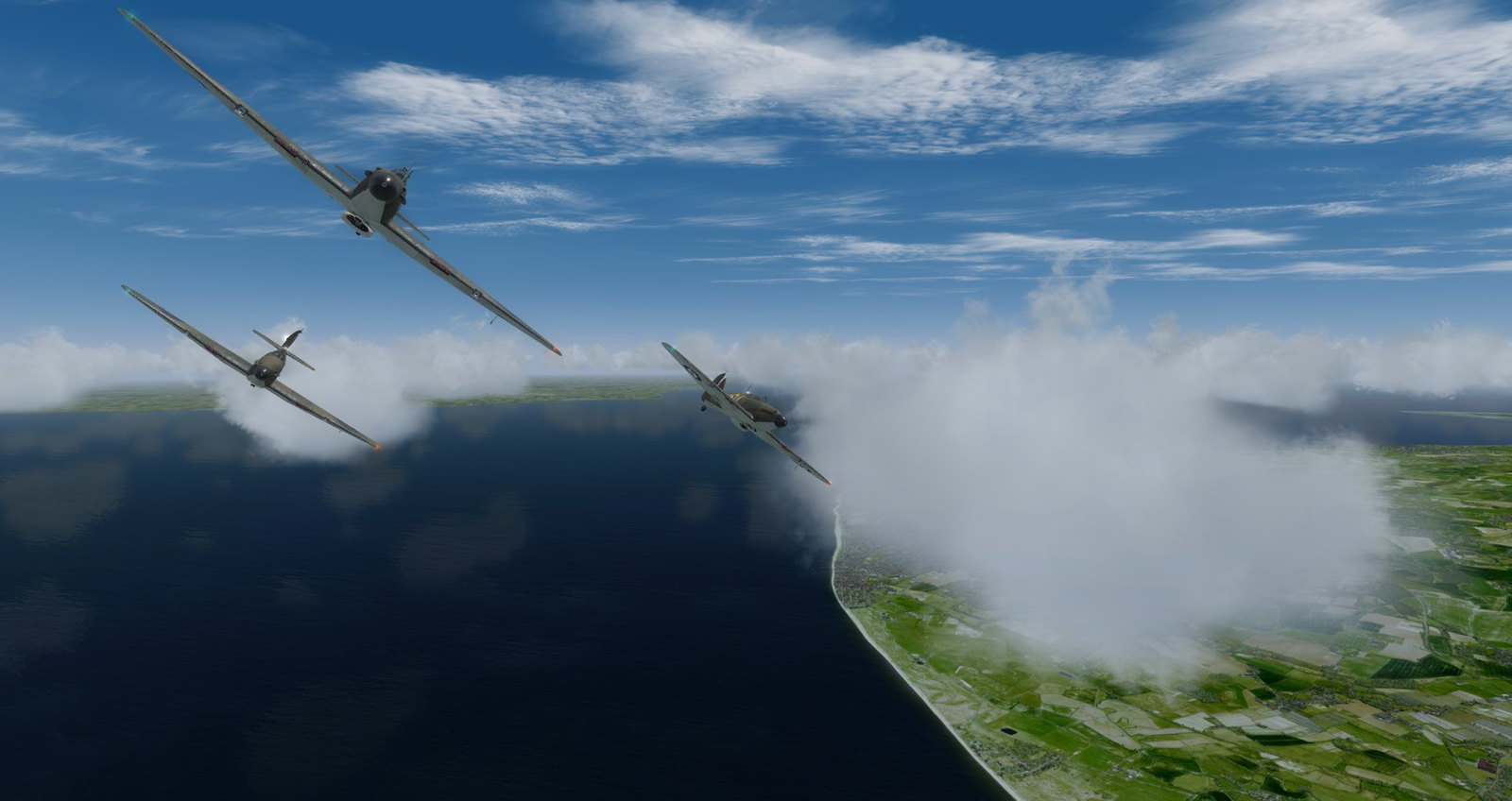 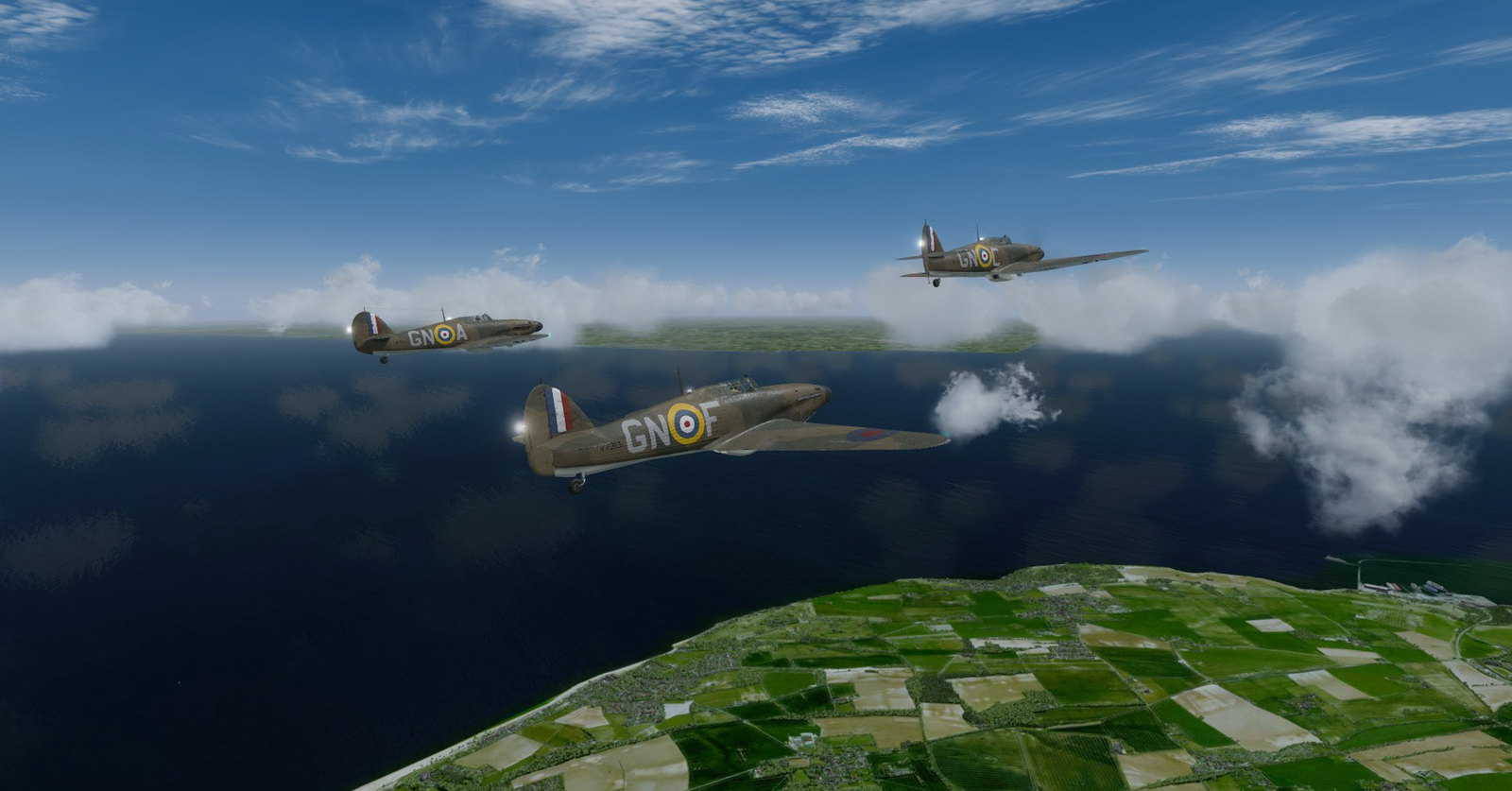 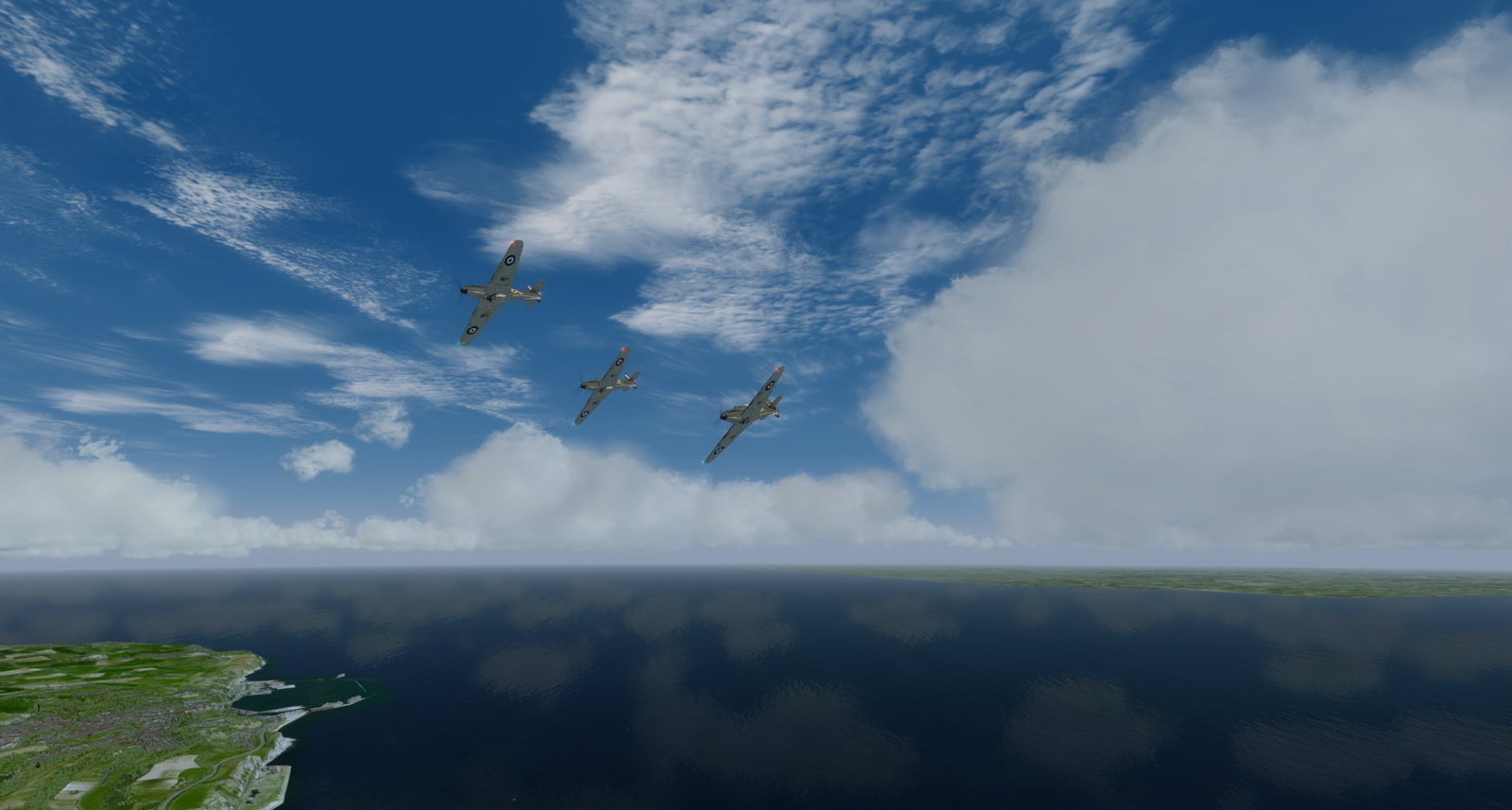 Love it ...but tell me more about that formation you screen machine

I adapted the textures that came with the model (GN-A) to show two 249 squadron mates and used aitrackerx to create a 'vic' patroliing Dover.

as for the aircraft:
P3576 GN-A that came with the model was piloted by Flt Lt James Nicolson, the only Fighter Command pilot to be awarded a VC during the war. More on him here: https://en.wikipedia.org/wiki/James_Brindley_Nicolson or here:http://www.bbm.org.uk/airmen/NicolsonJB.htm

P3870 GN-C was flown by F/O Richard GA Barclay. He joined No 249 Squadron RAF at RAF Leconfield on 23 June 1940, claiming 4 and 2 shared destroyed, 6 probables and 4 damaged between 2 September and 14 November. During an attack on a Ju 88 on 27 September, the 20-year-old pilot was shot down in Hurricane Mk I V6622 south of London and was forced to land near RAF West Malling. On 29 November, he was suspended from further operations following wounds to the ankle, legs and elbow in combat with enemy fighters. More on him: http://www.bbm.org.uk/airmen/Barclay.htm or here: https://en.wikipedia.org/wiki/George_Ba ... AF_officer)

V7313 GN-F was flown by Acting F/L Thomas F "Ginger" Neil of No 249 Squadron RAF, North Weald in 1940. Asked how he survived 141 operational sorties virtually unscathed during the summer and autumn, the 20-year-old pilot said that in addition to being very lucky and spending a lot of time ducking and weaving, it is important in aerial combat to have the sensitivity to know instinctively what is around you and he was lucky to have that ability. More on him: https://en.wikipedia.org/wiki/Tom_Neil or here: http://www.bbm.org.uk/airmen/Neil.htm