Following on from the previous thread, so as not to make the whole affair too long-winded:

Good friends of Australia the USAF turned up 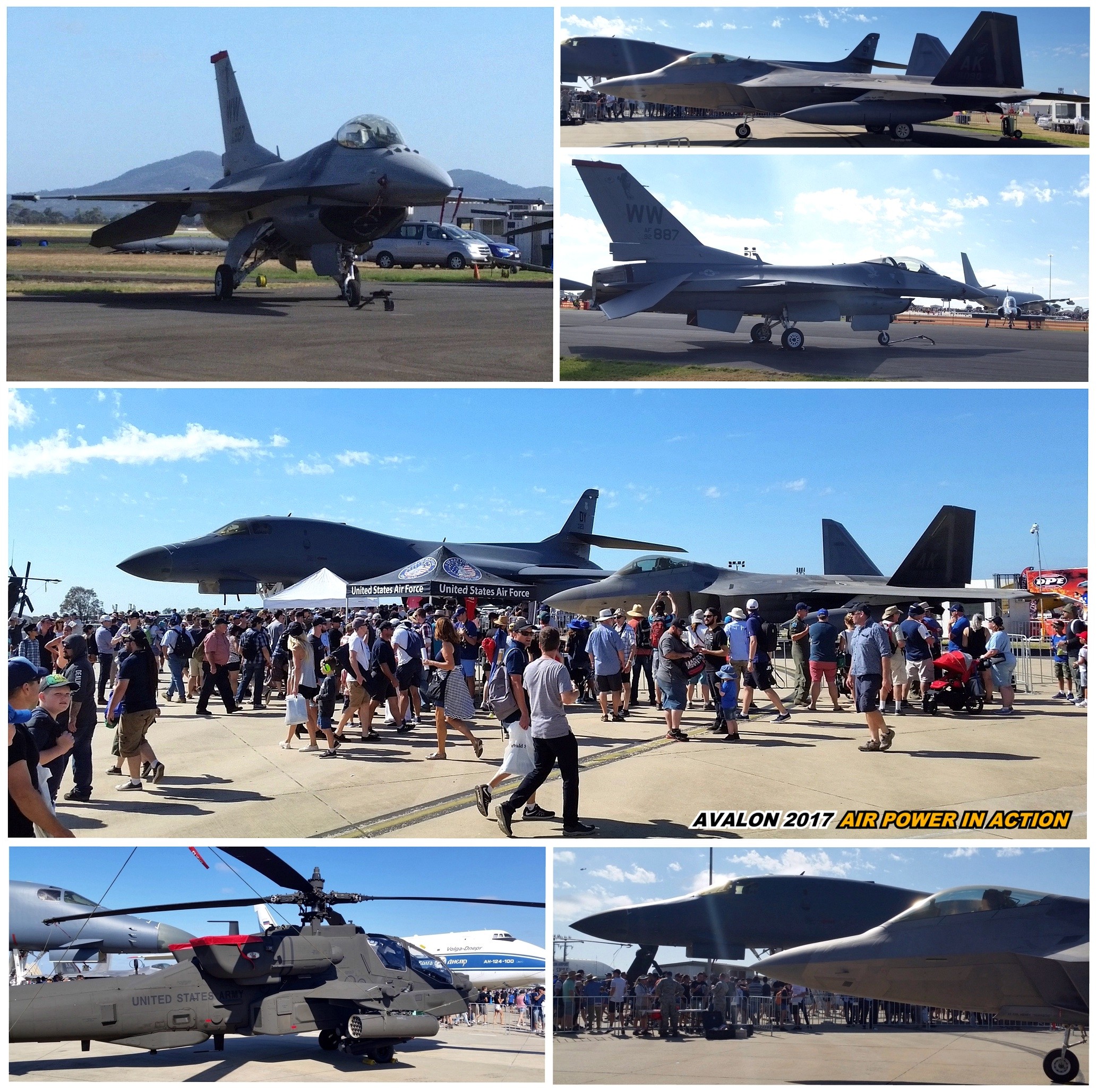 The flying commentary had to be heard to be believed, Texas Cheerleaders, anyone?
Here’s a phone clip (taken just for the sound track)

I’d hoped for a B-52 as I’d never seen one, but the B-1 was pretty interesting. You find some bomb bays around the front, then there are some more as you walk under it, and then at the back, even more!
It actually carries more ordnance than the B-52.
One highly complex bit of ironware. 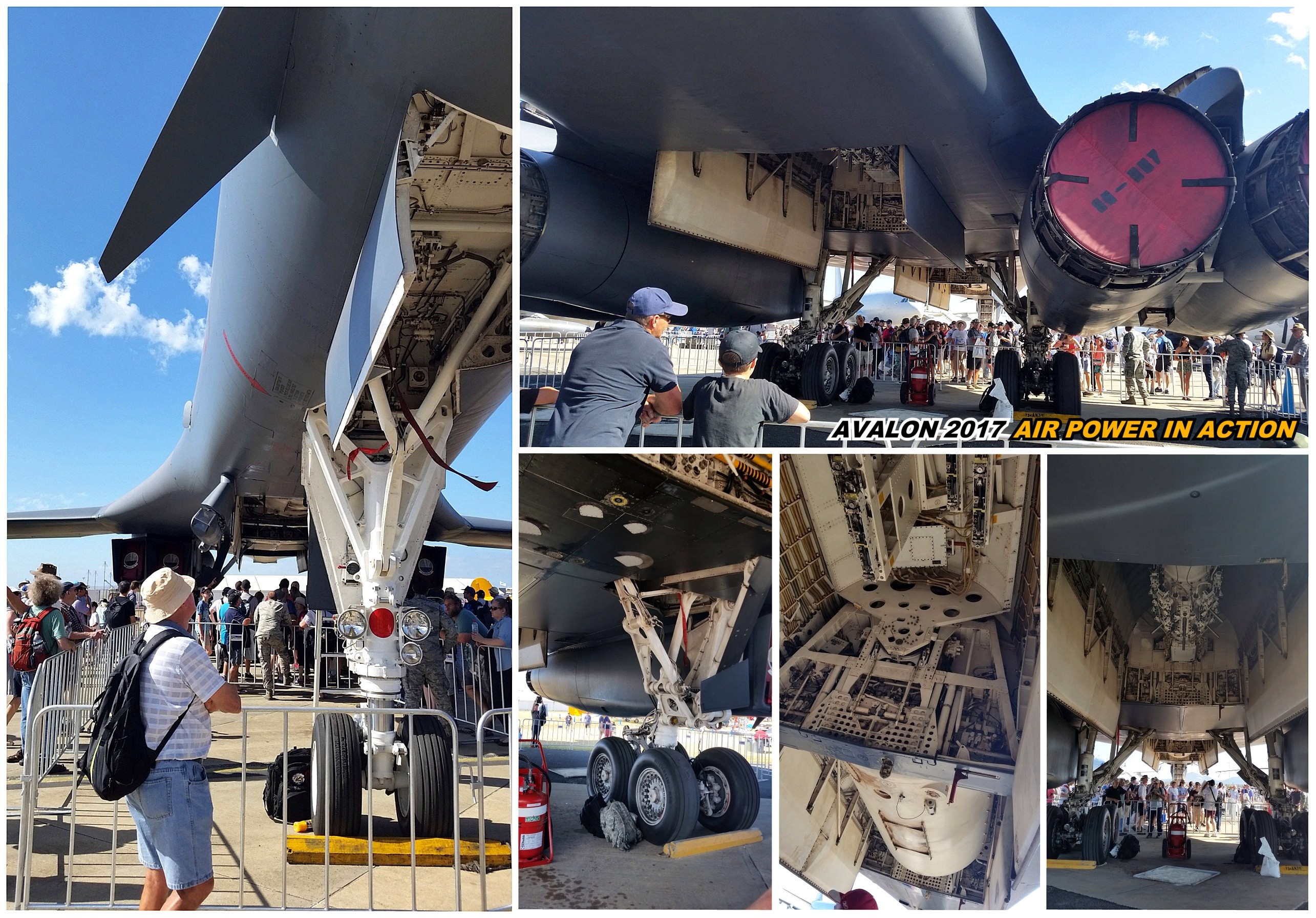 The Singapore AF was there too. I stood behind the F-15 and wondered how to one-up Marty’s great Badass shot, then gave up, blaming the lighting. Instead the shot is titled: I’ll raise you two, plus a coupla Hose ‘n Drogues! 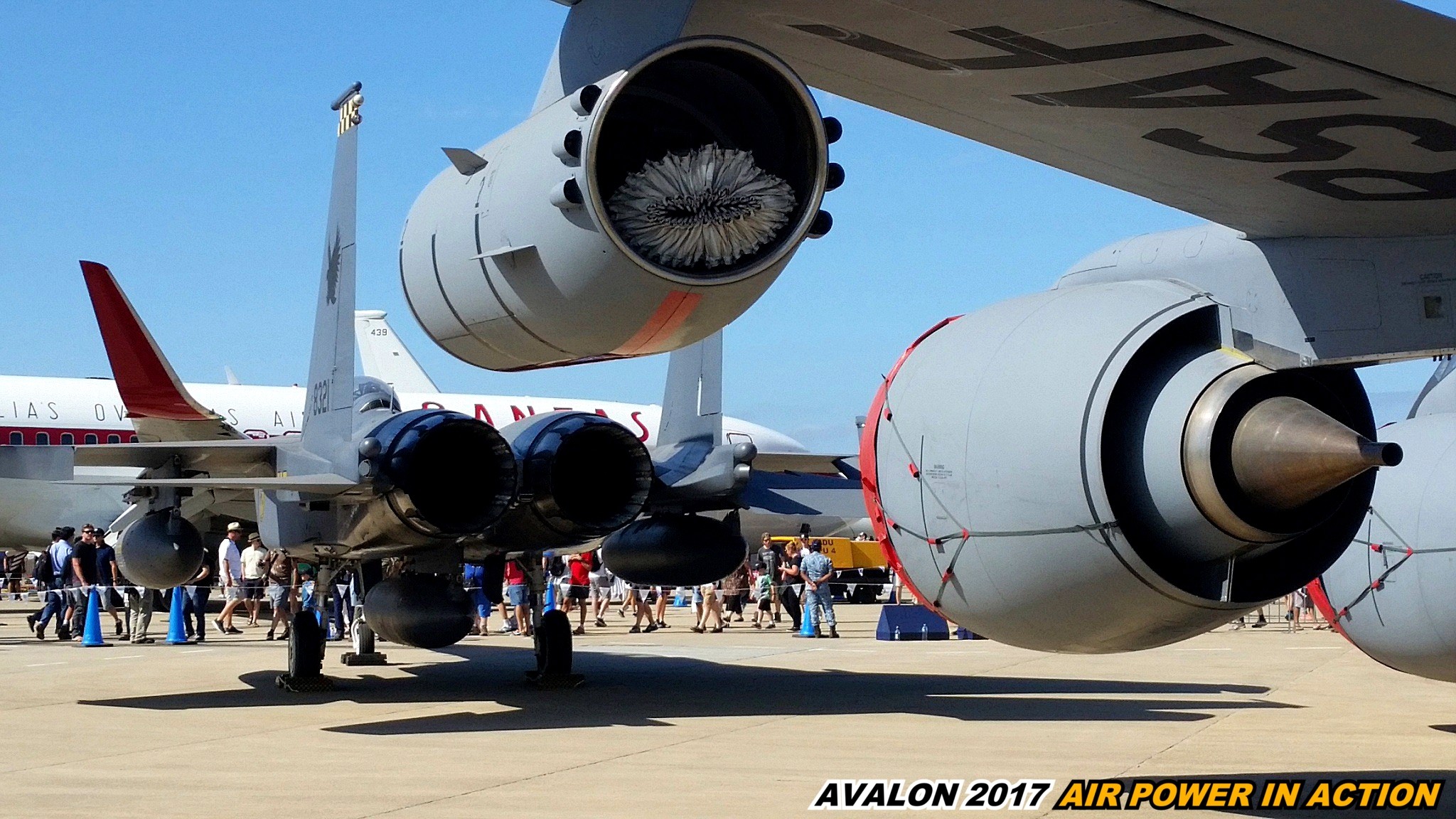 The Eagle, and specifically the -E Mudhen, must surely rate as the ultimate Gen-4 warplane.
Many a time I played through the night with Janes’ F-15E Strike Eagle, trying not to die attacking Mosul in Iraq. Some things change, some do not…
Speaking to the ground crew, I opined that they surely must have the most developed of the F-15E’s.
Nope, the Saudi’s have it: a fully digital Gen-4.5 aircraft which is better than the USAF can field.

One of our C-130’s cruised by as I stood chatting. 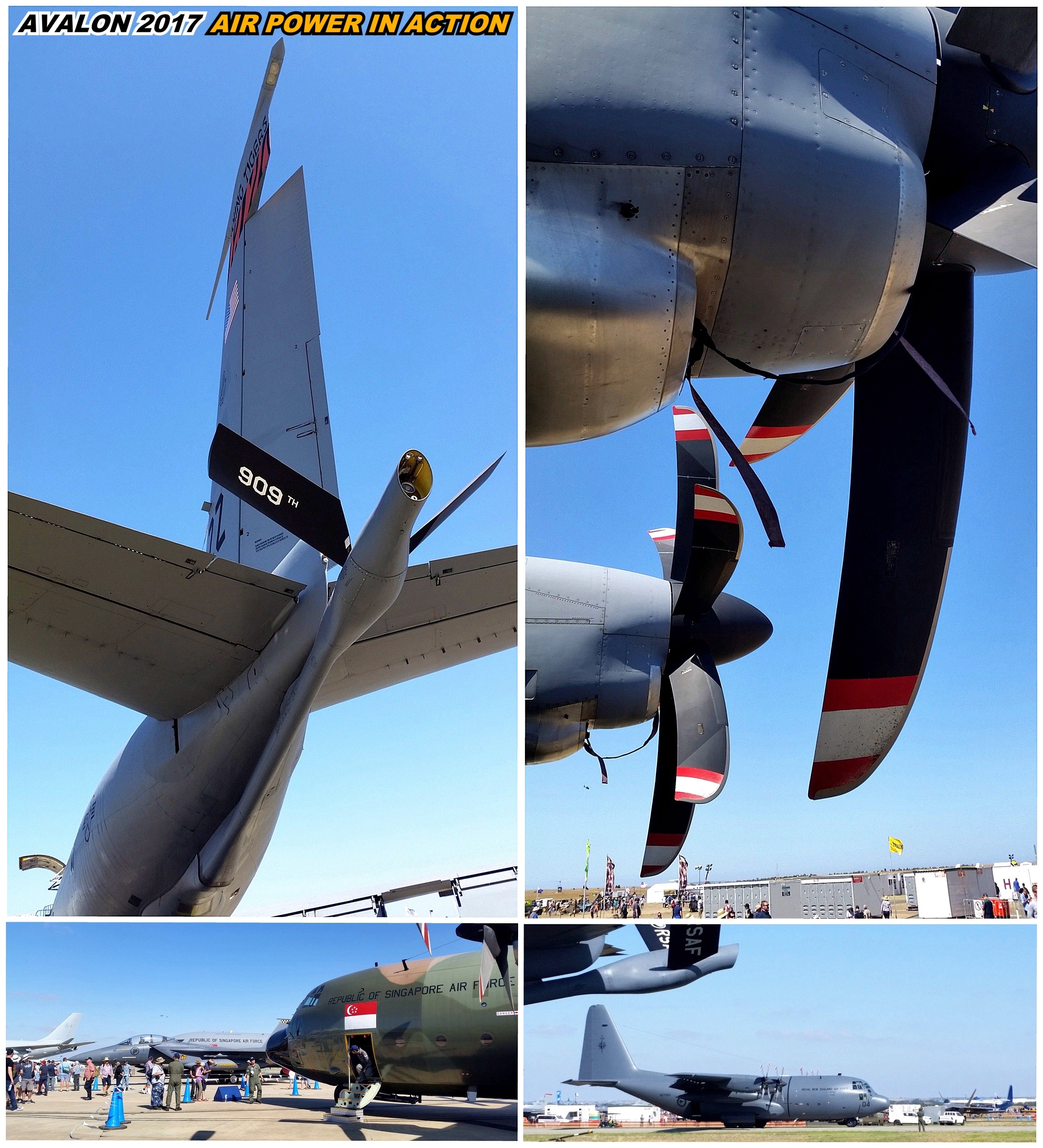 There's a nice YT video (not mine alas) of the flying display:

Still the best way to attend an airshow: fly in, enjoy, fly home.

That B-1 , when I first sure that arriving for the 2007 airshow it really looked sinister but smooth

That KC has a problem there is a cat stuck .. or asleep in the tube on the wing on the plane ... cats name is basket I guess

A great little Video added .. really adds to the memories .

Yup well put.
As to the basket: Why the USAF resolutely wants to fly a refuelling boom is beyond me.
Everybody else has seen the benefit of hose+drogue, including the USN.
The cost of having two systems?? 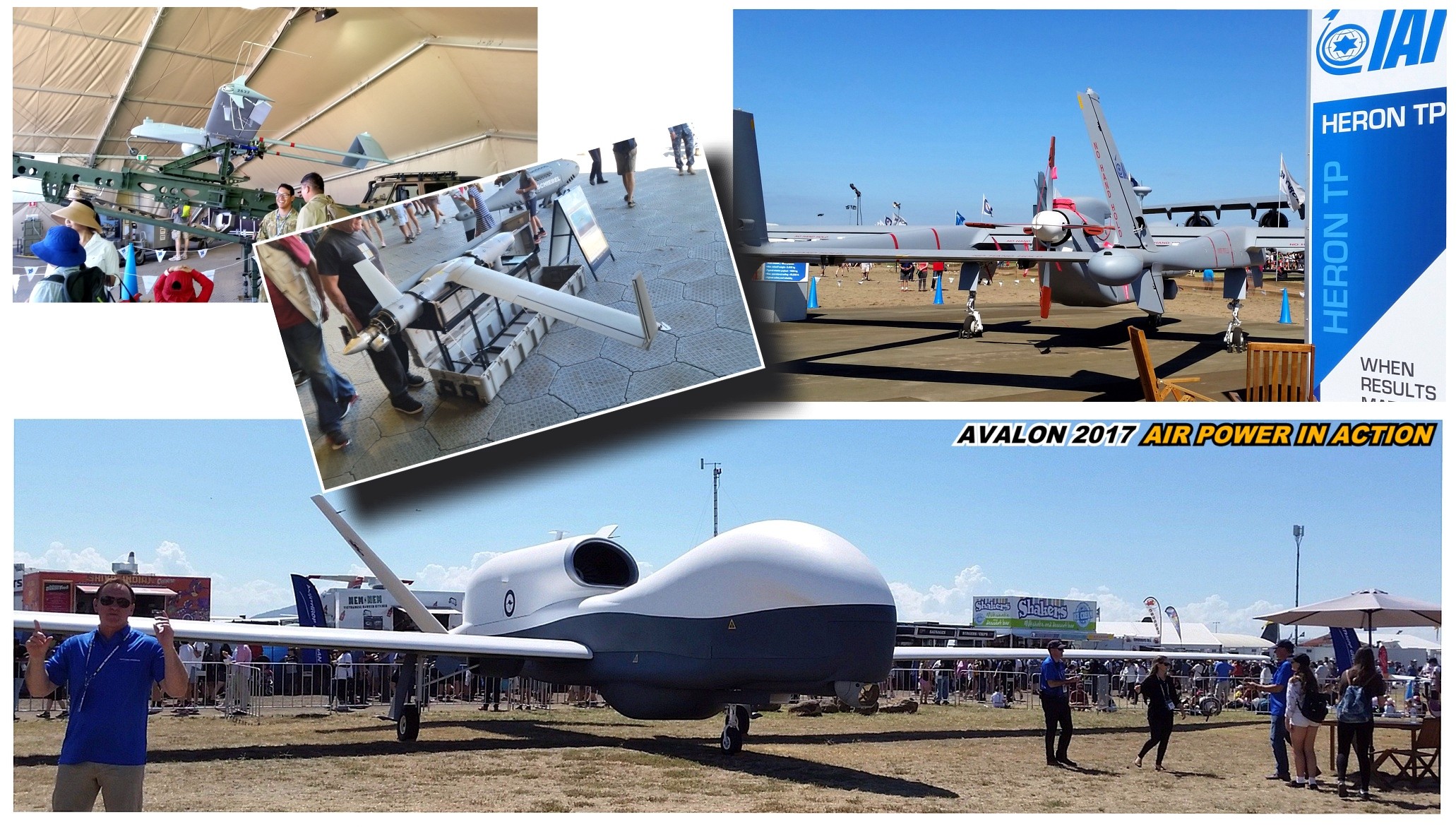 Plenty of UAV's on offer.
They are not as sexy as a Poseidon, say, but the Triton (bottom) does much the same job.
It flies above 50,000 ft. and has endurance to go all the way around Australia's long coastline in one hit.
It's based on the Predator but can dive down as required and take a picture of the ship's captain's eyeball if required.

The Scan Eagle (skew pic above) used to be a fish spotter but got Naval.
I'd love to have its carry box, just hands itself to you for the assembly.


That's what I have from Avalon, I suspect I won't need another airshow for many years.

Charl wrote:As to the basket: Why the USAF resolutely wants to fly a refuelling boom is beyond me.
Everybody else has seen the benefit of hose+drogue, including the USN.
The cost of having two systems??

The boom is for the USAF aircraft types, primary the heavy's .. hose+drogue is for US NAVY types .. KC's designed for multiple mission hence both systems.

Reading a bit: 'twas Strategic Air Command that pushed the USAF into it.
The boom has a higher fuel flowrate for the nuclear bombers to drink from.
I didn't know the tankers themselves have boom receptacles to receive fuel, even Airbus.

Charl wrote:Reading a bit: 'twas Strategic Air Command that pushed the USAF into it.
The boom has a higher fuel flowrate for the nuclear bombers to drink from.

Other big thing it was less fatiguing on the pilots, lot more effort with the basket, best historical view is the USAF Phantoms were the boom , were as the same era US NAVY Phantoms were retractable probes, then add to that another example is Air Force One is a receiver along with C-5 and KC-10s

Charl wrote:I didn't know the tankers themselves have boom receptacles to receive fuel, even Airbus.

My pleasure, actually it's a great way of giving oneself a debrief and perhaps finding out a bit more; and also the pics don't end up in a flushed folder called "2017"

The UAV's, now that's a job I could be given , mind you come to think, might be up against it with all the sim pilots on this forum

Watch on youtube.com
13 Victors and a bomber that was within a month of being scrapped!
... done with probe and drogue, plus a bit of No. 4 wire...

IMPRESSIVE! simply what movies and war comics are made up on, I have to dig up refuel tracking to that Vulcan from the Victors, amazing how long ago that was but still so fresh in my mind.