Here's a project that I've been quite involved with for several months now. Aerospatiale SA341 and 342 Gazelle for XP11. The package will include both military and civilian variants with appropriate differences. Includes, vibration modelling, military style external load operations, realistic start sequence, realistic nav computer on the military variants, crew and passenger models, flight dynamics checked by helicopter pilots, large number of colour schemes for both variants including NZs ZK-HTB in the later scheme that it wore. Unsure of the actual release date yet, we're still chasing a few bugs but it'll be soon. Here's some pics of a test flight that I did checking fuel burn and CG changes. 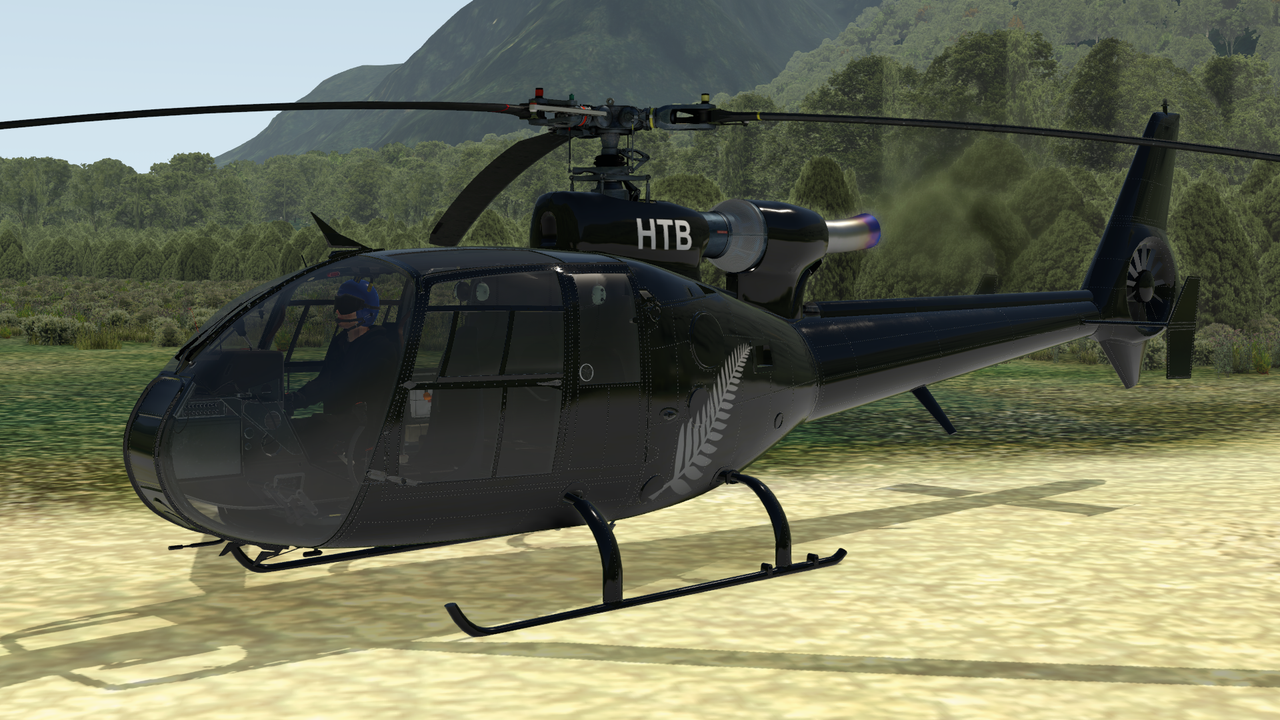 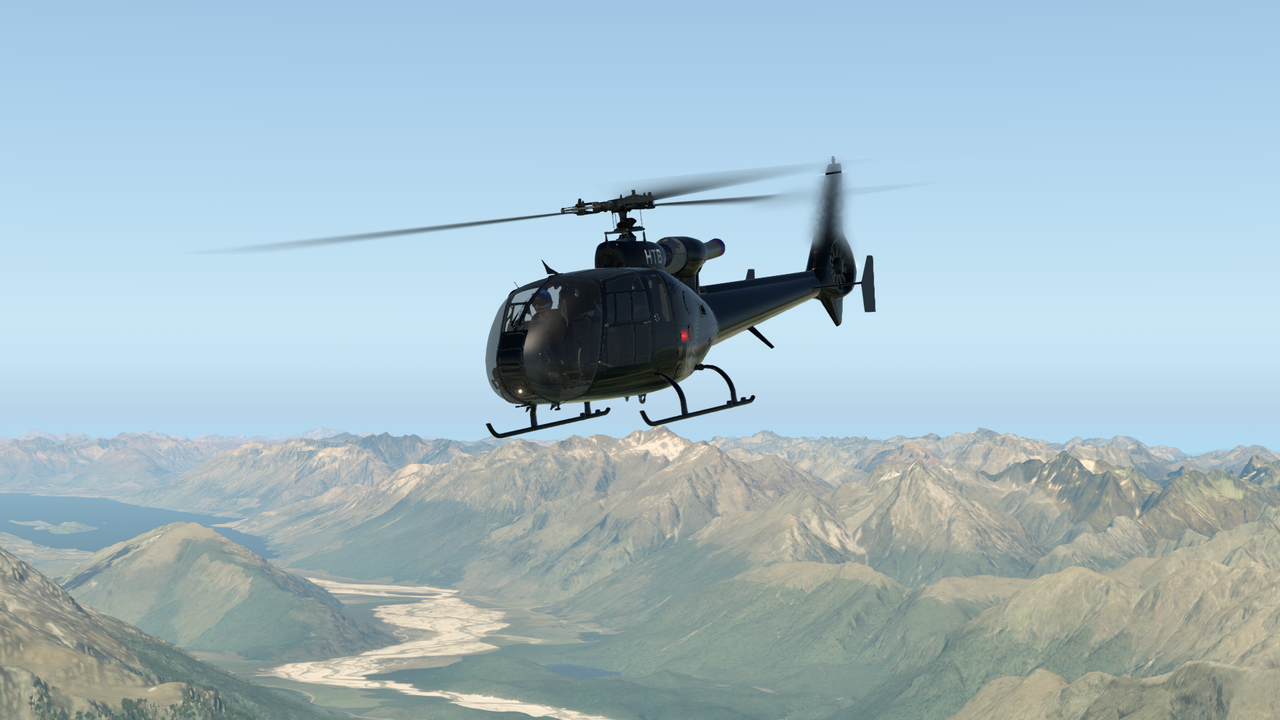 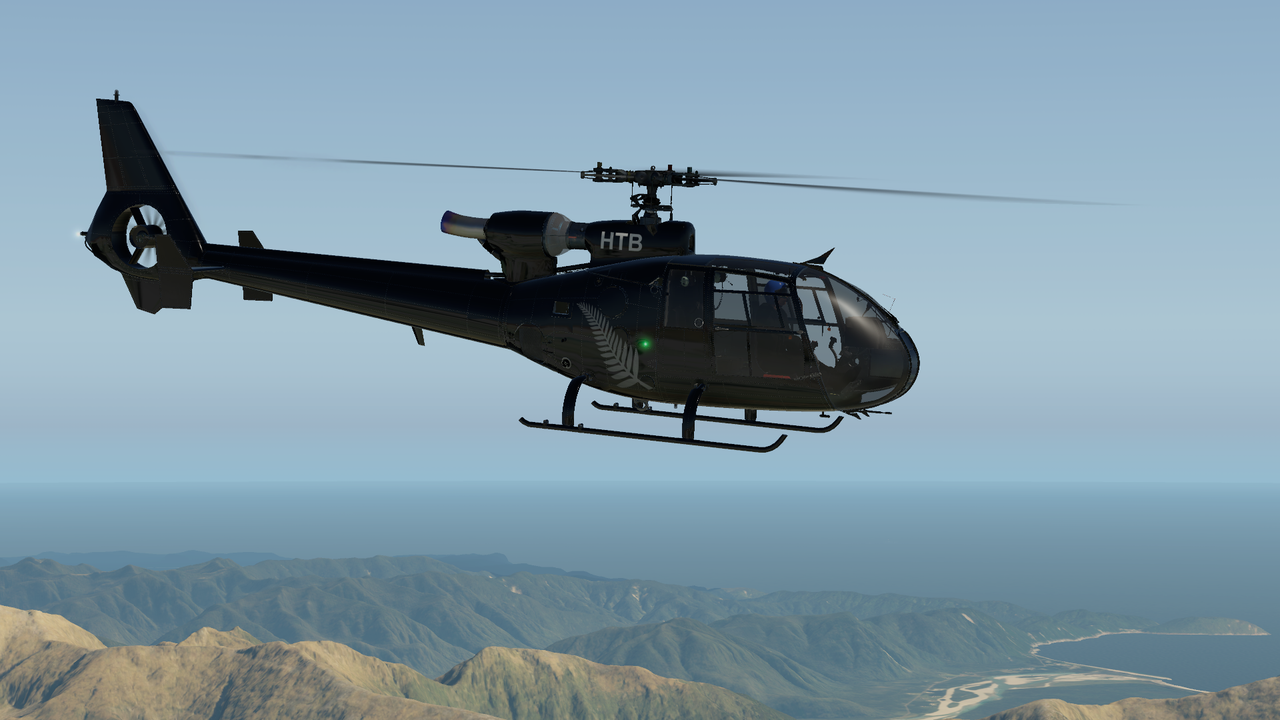 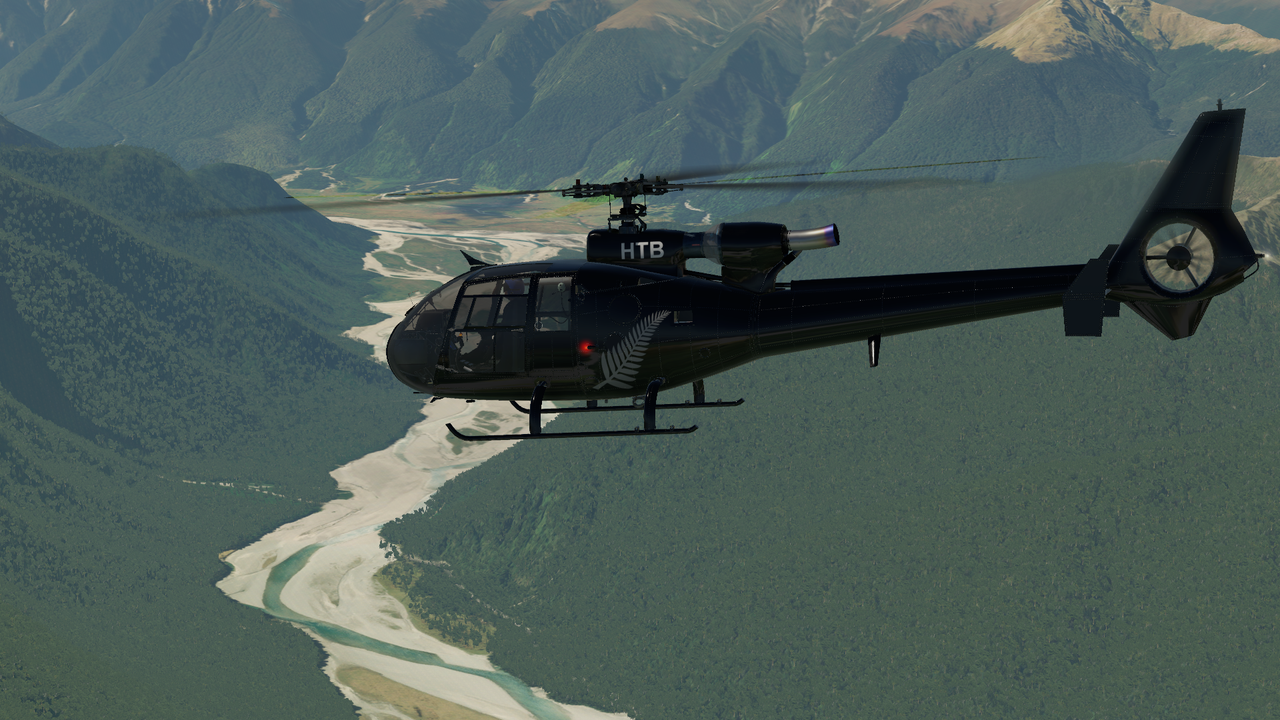 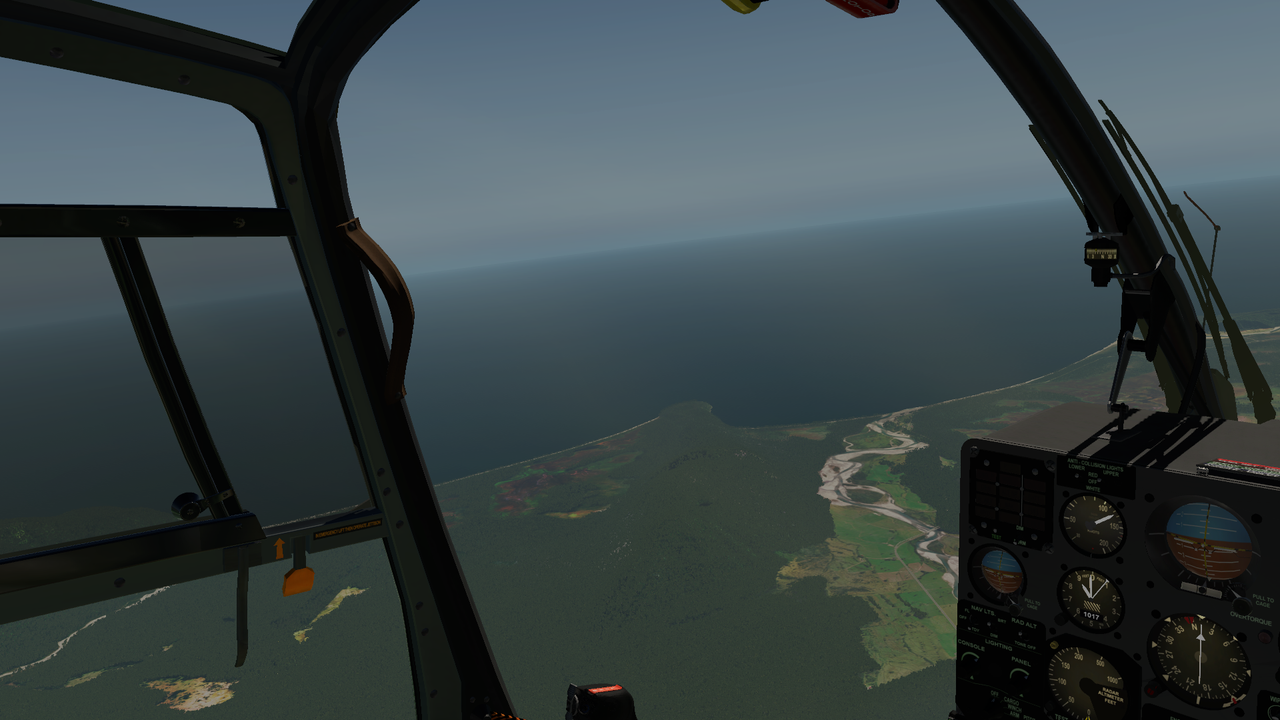 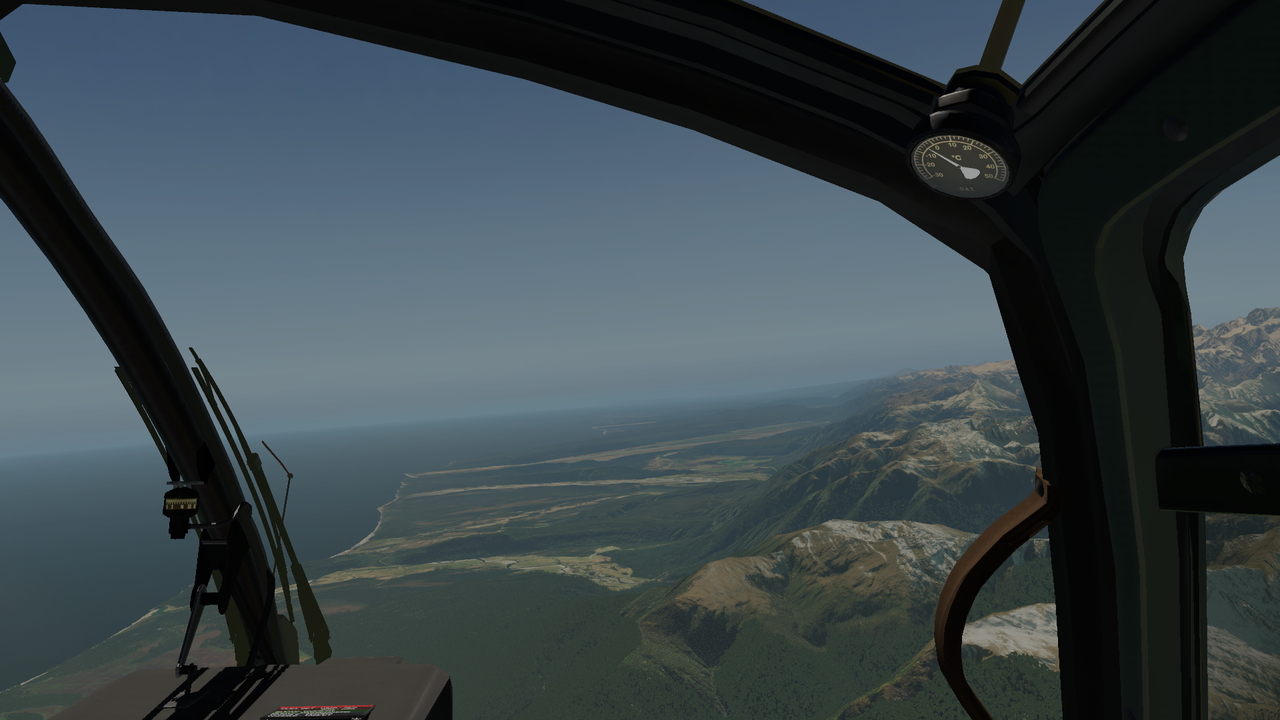 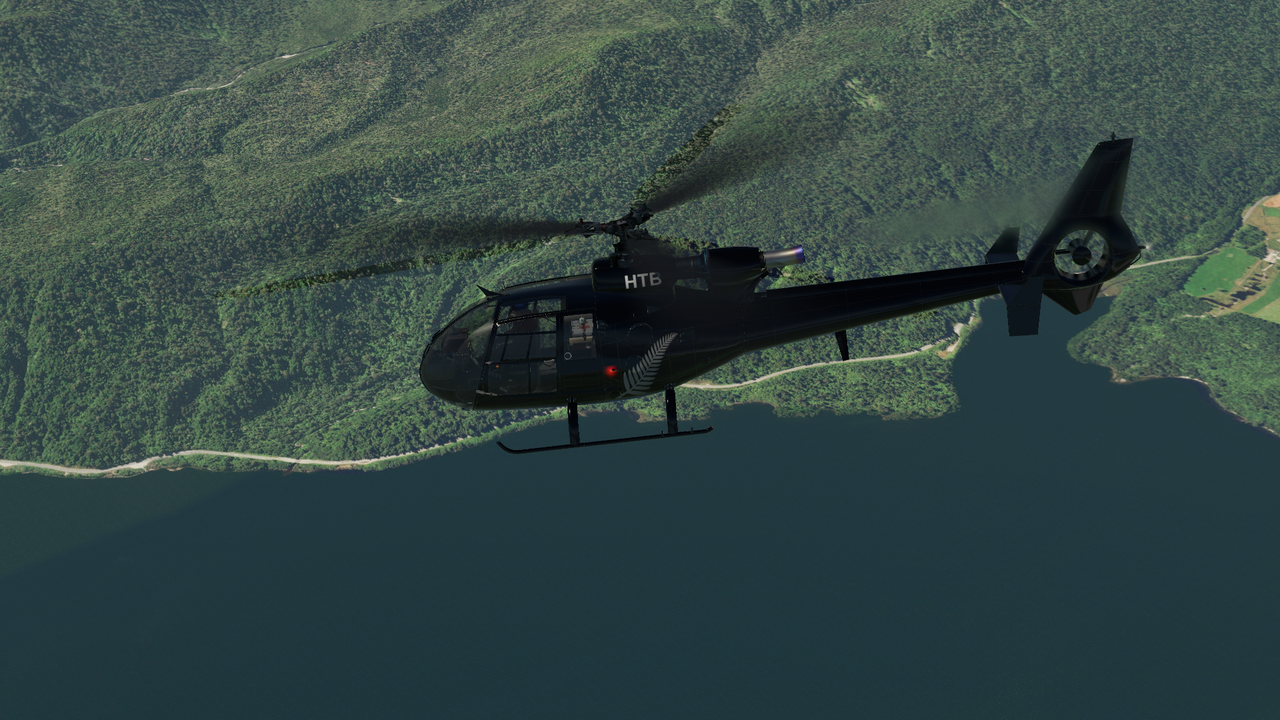 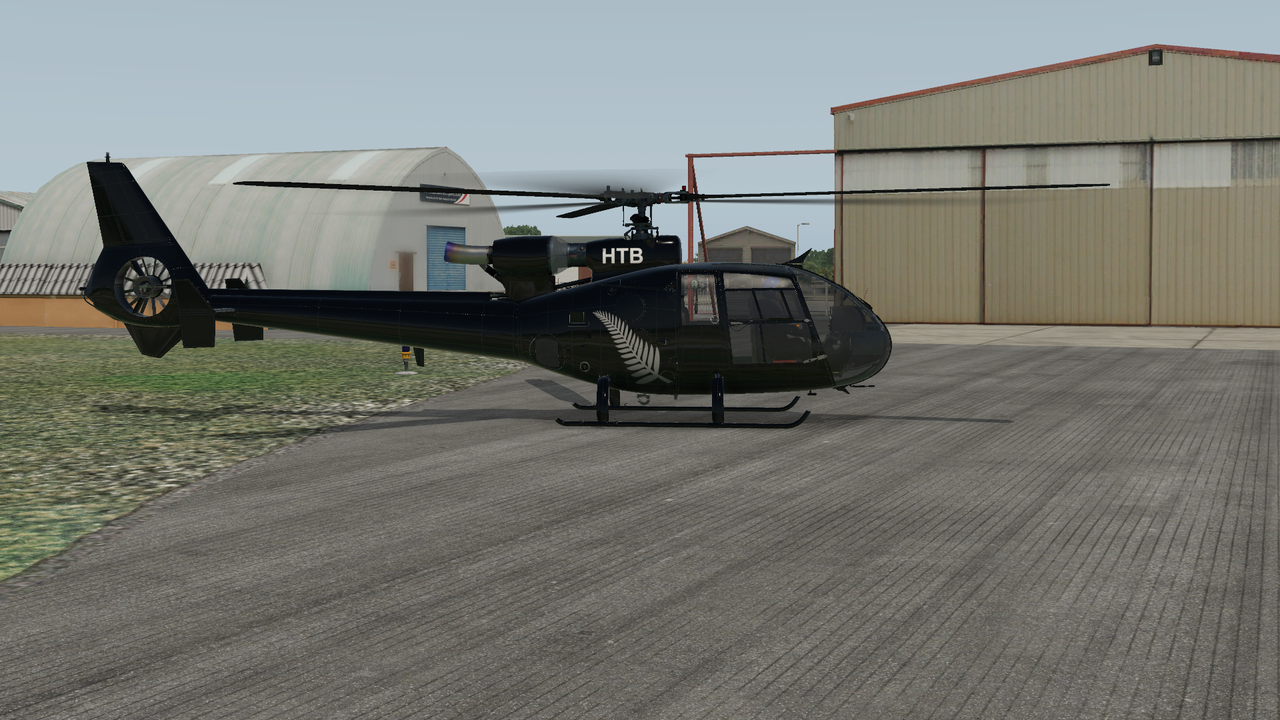 That looks cool. Be nice to have it in P3D...even with it's poor heli physics.

Looks good.What scenery is being used?

cowpatz wrote:That looks cool. Be nice to have it in P3D...even with it's poor heli physics.

There is one for P3D by MP Designs but I can't vouch for how good it is. It had a mixed review on Helisimmer. The numbers of people developing helicopters for P3D is dwindling.

Thanks, it's just the Lyndiman ortho tiles with custom overlays.

Nick, are there any Lamas still operating here ....I'm sure I can recall seeing (and hearing) one here several years ago....loud little buggers.

Hey Marty, as far as I can remember, there is currently one operating with Lakeview at Taupo. I don't think there are anymore right now however I may be wrong. Yep they are pretty noisy beasties. It all has to do with the type of compressor on the Artouste engine.

Fantastic, looks lovely and Im sure you've had an excellent influence on getting the physics as solid as possible.

I'm actually pretty proud of the work that's been done on it. The guy who designed it flew them in the British Army years and years ago so we had a solid basis right from the start. Made the team's job much easier.

When I was growing up in Mangere Bridge, Auckland, we lived across the road from Boyce Barrow who owned Marine helicopters, which back then was one of the bigger heli operators. On a regular basis he would fly a Lama to and from his home on the upper slopes of Mangere mountain.
He would later be joined by his son, Nick Barrow, whom would also fly helis to and from home. Tragically Nick was killed in a heli accident due to a wire strike whilst flying thru a valley. I can recall having many a dinner at home when they would fly in and land in their large back yard. I could spend hours watching them come and go and would climb up onto our roof, or head part way up the mountain, to get a better view. The Lama was most impressive and was probably the original source of my addiction to the wonderful smell of burnt jet fuel. Boyce's nephew, Greg Barrow, also flew heli's, and i think initially it was also with Marine. Greg became involved with managing Airwork NZ and also with the NZ police heli division. I used to go to school with Greg who lived 5 min walk away around the corner and across the road from the then young Sir John Kirwin.
In latter years I almost needed the services of a Lama to rescue my car from the tide at Cornwallis beach, on the Manukau harbour......but that's another story and preferably told over a few beverages.

Good stuff there. Yeah Marine were big operators back in the day. Lots of 500s too.

Love the Gazelle. When I was 16 I wanted to be a heli pilot in the UK army. They flew Gazelle and Lynx at the time. Loved the Gazelle fenestron tail rotor.
Passed all the entrance tests and the recruiter said I could have my pic on jobs.
I said heli pilot ... and somehow, and 32 years later I still don't know how, walked out of there as a cartographer!
Next day withdrew my application and never did join up ... never occured to me at the time I could ask to *change* my application.
Fairly certain I missed out on the chance of a flying career, and have been a 'frustrated pilot' ever since.
I love flying in helis, but rarely get the chance ... I did hover a Hughes 300 (Schweizer 269) at Ardmore once (first and only time at the controls; everything but throttle).
I put the grainy long-distance video on my YT a couple months back.
-- Jeff, Rolleston, NZ
P3Dv4.x and a bunch of add-on stuff... some 'global' products, but otherwise NZ-only

Haha, the military works in mysterious ways. Yours isn't the first story like that that I've heard. I presume you've watched that 'Flying Soldiers' on youtube?

Bo, I shall look it up. Thanks
-- Jeff, Rolleston, NZ
P3Dv4.x and a bunch of add-on stuff... some 'global' products, but otherwise NZ-only

The Gazelle was released today on the XP store. Happy flying.

If it is anywhere as good as their Bell 206(arguably one of the best heli on flightsim) then it will be a good one.Incidentally,what controls do you use to fly helies in X plane?

In all honesty, I prefer DFs old 206 to Simon's one. A few other real world pilots feel that way. In terms of quality, the Gazelle is up there with the best of the payware helicopters I think. I just use an X56 HOTAS with the spring removed and Thrustmaster pedals.

Here's a link for my review for the Gazelle in case you were on the fence about getting it. Spoiler alert.... it's good.

Good job Nick starting to see videos making an appearance now on youtube, with some good comments made by opinionated Aussie Tristan aka Novawing24 on his latest NovaWrap 28 June 2020 With the SA 341B and SA 342J Gazelle being commented on around the 3:58 time stamp. Since he and Sérgio from Helisimmer.com are good mates.

Also seen these recent videos if anyone wants to see some in-flight flying.

Users browsing this forum: No registered users and 5 guests