And now for something completely different

For once in a long time an advertising hook grabbed my attention the other day promoting an ATC simulator for the iPad. The game is "Airport Madness - World Edition" the sixth in a series of releases from established developer "Big Fat Simulations".

Here's how they describe the game..

And here's how I describe it, and you can quote me

OK so I guess I can afford to be a little more generous with the feedback, but it really is a great wee game and a pleasant distraction from regular simming, and life in general. Although I play a lot of stuff on the PC most of the games I've bought for the iPad up to now have been Barbie Dress Up or Talking Kitten games for my daughter. But now I finally have something I actually enjoy and have been playing almost every day for two weeks now which in itself is something of a record. Hell I often only use payware add-ons in FSX for a few days before moving onto some other sparkly new thing.

So what's this Airport Madness thing about. Well, you get to choose a major international airport which is rendered with runway layouts in roughly realistic fashion, taxiways and gates of course less so as there's only so much real estate available on a wee screen. The imagery is rendered with enough detail to look good and in keeping with the natural local features (take for example the floating logs in the river in the Vancouver shot following, yes there are logs in the rivers adjacent to the airport in real life). 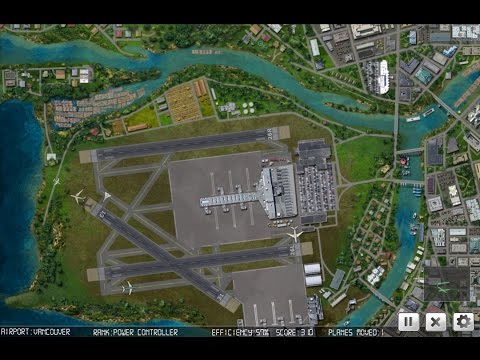 The detail doesn't get so fine grained though that things become too small to see, and the objects you do need to see are large enough for adult fingers to interact with on the touch-screen without looking too large or cumbersome when they're all moving about the place. In that way its suitable for all ages, finger sizes and eye-ball strength.

Interaction in the game is amazingly well suited to the iPad (and Android tablet I'm sure). The guys that worked on the UI and user-experience side of things did a fabulous job and deserve a pat on the back. The whole game is centered around selecting an aircraft and choosing from a simple popup menu what you want that machine to do. For example if the aircraft is inbound you would direct it to one of the runways to land, if it's at the gate ready to taxi you would select a runway for it to taxi to, if it's at the holding point you tell it to line-up and wait or to take off.

Sounds simple, and it is when there are only a half dozen aircraft to rally. But, various game modes pickup the pace the longer the game goes on to the point where it is truly manic and your fingers, and brain for that matter, must move at the speed of light as you are constantly orchestrating movements. Before you know it aircraft get queued up waiting at holding points and for crossing clearance, taxiways get congested and grid-lock ensues, in-bound aircraft are competing for runways and occasionally colliding with each other or departing aircraft that are a little slow to take off. You get the picture.

It sounds stressful, just as the real life role surely is. Now I'm sure the developers in now way claim to be presenting this as a training device of any kind, but I think it does give you a sense of the multi-tasking involved and will allow you to measure just how effective you are at handling lots of chaotic inputs at increasing pace.

I'm sucked into this now big time and will surely be keeping an eye on the franchise to see what they come up with next. For only $10 I think it's really great value too, the price of a couple of Coffees at Auckland prices. Check their website out following...
http://www.bigfatsimulations.com/

I guess It would ideal for us simulator fans away from the PC, sitting in a airport terminal waiting for the next plane out , sure as hell beats 'space invaders'... all I need now is to get an iPad or android and learn how to use it .

Yeah Ian it is actually one of those sorts of games you can pickup and put down at a moments notice so yeah ideal for on the bus, or waiting for a plane etc. Is also kid friendly, my daughter and I have been playing it together (much to her mums horror) where I act as chief-bottle-washer and tell her what to do and she clicks the aircraft and chooses the right action, e.g. I'll say "send that plane to 26L" and she does it.

Fun for all the whanau

Looks like there is a pc version as well, and a free trial... might have wee look